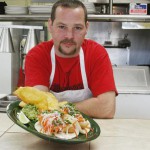 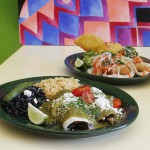 The West Asheville dining picture is changing at such a rapid pace, it's enough to give anyone whiplash. Recently, Xpress detailed the bowls of soul at Magnetic Field, Chall Gray's café, performance house and bar in the River District, whose chefs are fixated on anything served in a bowl (though they've got some plated items as well). We also noted that a defunct but well-loved Montford Avenue sandwich shop, Viva Europa, is now resurrected as Viva Deli on Haywood Road, to a very warm reception (there was a line out the door on the eatery's opening day on Jan 3).

What else should you know about West Asheville eats?

Sunny Point offers a banging breakfast, to be sure, but flexes some culinary muscle at dinnertime as well. The Lucky Otter serves $4 margaritas with house-made sour mix in 12-ounce glasses, and still serves large heaps of beans and meat at low prices.

You can find Ethiopian food on Tuesdays at DeSoto Lounge, and if you don't know that you can find great smoked wings at the U-Joint, you ought to. Peter Affatato (of Nona Mia fame) fired up the wood ovens at Ritrovo Pizzeria in the latter half of last year, and offers some rather delicious fancy-pants pizzas; right down the road, Standard Pizza offers simple slices into the wee hours (until 1 a.m on Fridays and Saturdays).

And, as we noted just last week, Rocky Lindsley is bringing his brand of atomic chicken to the west side this year, having shuttered his beloved Rocky's Chicken Shack in Arden to much wailing and carrying-on from the eatery’s cult-like following.

But wait — as the saying goes — there's more.

Revival of an icon

It may seem like Xpress has committed quite a bit of ink to the Admiral. But the little hole-in-the-wall-that-could continues to be the West Asheville dining spot to which all others get compared.

Case in point: When Scott Woody talks about the Isis, a venue he’s opening in the building recently vacated by longtime resident Pastabilities, he says that he's importing chef Michael Mahoney to run his kitchen. Mahoney, who helms the Island Grille in Atlantic Beach, N.C. reports that a few Asheville-area diners have compared his cooking style to that of chefs Drew Maykuth and Elliott Moss at the Admiral.

Woody is reluctant to draw comparisons between the Isis and the Admiral, but he’s clear about wanting to serve very good food, and serve it late into the night. He emphasizes that he would like to keep the prices on the reasonable side.

It's exciting enough to learn of a new, talented chef on the scene, but even more interesting is what Woody has planned for the building at 743 Haywood Road. It once housed the Isis Theater, when West Asheville was little more than a gritty smudge on the wrong side of the river (a postcard depicting the Isis is dated from 1937).

Woody plans to restore the interior, though the focus of the Isis won't be on movies, but music, filling a Rocket Club-sized hole on the west side of town. The new Isis, says Woody, will hold 250 seated concertgoers, and even more for standing-room shows. He says that the venue may host plays and movies in the future, though, like much of his plans, he says, everything is in flux.

Woody adds that he'll install a 50-seat patio and green space in the rear of the building, beautifying the aging expanse of pavement currently there. Amid his efforts to restore the area, he wants to keep the rough charm intact.

"The character of West Asheville is what drew us here in the first place," he says. "We're planning the character of the neighborhood into the restoration."

Right down the road from the future Isis, Bandidos Burritos, known mostly as a street food cart that frequents the Wedge, the Green Man Brewing Company (AKA Dirty Jack's) and downtown, has moved inside. Owner and operator Justin Smudde reports that he's keeping the cart on the street and at the breweries, and maintaining the West Asheville storefront as both an eatery and a licensed and convenient place to prepare the food he serves from his cart.

Bandidos is not — I repeat — is not your typical burrito joint. As a matter of fact, it's really not a burrito joint at all. The eatery, best described as south-of-the-border with a world-fusion bent, serves a variety of tacos, tamales and platters that put a twist on the traditional Mexican food. Sure, it's a little gringo-fied, but it's also very good. What Smudde serves is simple, but well-flavored and funky (in a good way), reminiscent of what Salsa's served when it was still a little hole-in-the-wall itself. Smudde refers to it as "pimped-out street food.” I refer to it as “good.”

The eatery is located near Burgermeisters in, frankly, a rather ugly stripmall off of Haywood Road. The restaurant itself isn't the prettiest of places, though Smudde's done what he can with local art and splashes of color on the cinderblock walls. The focus is decidedly on the menu, which is hand-scrawled on a chalkboard that hangs above the window through which the food is both ordered and served.

As a perfect example of the fusion flavors that he serves, Smudde serves up something that he refers to as a "bahn mi fish taco," a dish of seriously globe-trotting flavors. The flavors of a Vietnamese bahn mi are there in a lightly vinegary daikon and carrot salad with a sprinkling of cilantro, but it's topping a Japanese-influenced tempura-battered piece of fish — which just so happens to be North Carolina trout. Rounding out the world tour is a chipotle crema. It's all slightly crazy, but it works.

Those enchiladas were deeply flavorful and richly spiced. The house-made salsa, guac and spiced homemade chips that Smudde served alongside were very good, too. It's enough to make those of us who don't live within walking distance of such a place a little jealous.

There's even more to come in West Asheville, believe it or not. Visit mountainx.com/dining for the most up-to-date food news.