The farm is an immutable part of the American idiom. The image of the silo, the big red barn, and the sprawling ranch house are as indelibly marked on our indigenous identities as the stars and stripes, fried chicken and high school football.

But with prepackaged food and grocery store convenience, it seems miraculous if a child brought up today can recognize a tomato on the vine or an ear of corn fresh from the husk. Fortunately, there’s one pretty great supper club that roams the world seeking to make this connection a little more rooted, and it made a brief stop-over in the Asheville area last Thursday.

Outstanding in the Field has been organizing farm dinners since the 90s — before it was cool. Organized by Jim Denevan in Santa Cruz, Calif., over 15 years ago, the team connects local chefs with their favorite regional farmers to host dinners that take place out in the fields, all in an attempt to reconnect diners with the source of their food.

When we arrive at Gaining Ground Farms for the Sept. 25 dinner, the clouds that ominously covered the hills have just dispersed, leaving in their wake a string of black cirrus clouds that streak the horizon like the mark of a cats claw — long, slender and sparse.

Just beneath those clouds stand the ubiquitous aforementioned silo, barn and tractor, perfectly nestled in a hilly farmyard, crops stretching into the distance, cattle dotting the hills. But the obvious, if anachronistic, standout is the big green tent of Haw River Wine Man, a local wine distribution company, whose staff members are pouring sparkling wine from a Jura to welcome the guests.

Waitresses pass by with hors d’oeuvres of crispy pork belly with a sorghum glaze, pickled okra and Lusty Monk mustard; and jalapeno biscuits with brie, foraged ramps and an Espelette pepper jelly.

The crowd is mainly composed of out-of-towners, most from as near as Charlotte, but some from as far away as Florida and Alabama. Each has dropped $200 a piece for a seat at this table, so no one is going to miss a bite of food or a drop of wine; we’re all bent on soaking up every last drop.

After a brief tour of the farm guided by its proprietors, Anne and Aaron Grier, we reach the table, which is beautifully nestled between the greens and sunflowers that construct a wall between our dinner table and the open air kitchen.

The spread is immaculate: Large, white-clothed tables stretch end to end throughout the field. Bright blue skies and a simmering autumn sun hang overhead. Guests are encouraged to bring their own plates, something that builds a quilt-like patchwork across the sparsely set table.

With provisions from our hosts at Gaining Ground Farms, The Culinary Gardener, Farm & Sparrow, Looking Glass Creamery and Apple Brandy Beef, Dissen weaves together a menu that highlights the strengths of some of our region’s artisan growers, butchers and bakers.

When the first course is laid out, the sun is high on the hills. It is served family-style, and our serving spoons scoop out heaps of grilled leeks mixed into a salad with foraged-mushroom ragout, shaved beets and herbs, white-anchovy aioli and red-ribbon sorrel paired with a ripe sauvignon blanc from the Friuli region of Italy.

Next comes more wine, a Barolo from the piedmont of Italy, set alongside a magnificent wood-roasted pork sausage, ahi dolce pepper coulis with roasted carrots, chimichurri and chevre.

I have the good fortune of sitting next to the chef’s mother, who tells me wonderful and embarrassing stories, one of which involves a so-called “drunken pork fest” wherein the chef, apparently unsuccessfully, attempted to cook a whole pig for his classmates in celebration of his college graduation. “Then he went to culinary school,” she declares when I ask if anyone was made ill from the roast. “The pig was cooked!” protests Dissen.

Somehow the mosquitos know to stay away. Maybe they just got drunk off of our bloodstreams and passed out early. After all, by now we are sipping on a 5-year-old Remelluri Rioja Reserva. A fruit-forward, rich and rounded complement to our plates full of grilled sirloin from Apple Brandy Beef, served with a saffron corn sauce, spicy cherry tomato relish and crispy herbed fingerling potatoes.

“I don’t know what more there is to life than this: truly enjoying what you eat,” says the man sitting across from me. He’s from Florida, but he has traveled across the globe in his gastronomic pursuits, taking food tours in Italy, Spain, all over.

But this evening, as the sun starts lowering onto the hills, he pulls out a his phone to catch a snapshot of his wife laughing with the stranger across the table, the cattle casually grazing in the background. “Look at that!” he says, showing me the photograph on his iPhone. “Who’d have thought we’d be sitting here at dinner in the middle of a cow field tonight?”

By the time dessert rolls out, so have the candles, now glowing yellow to combat the gathering dusk. On our plates is a blueberry and fig crumble toppled upon cinnamon streusel, lemon verbena custard and creme fraiche, and sprinkled with borage flowers.

The chefs give their speeches by lantern light, the mountains glowing with stripes of pink, blue and purple. We all listen, we all applaud.

I am not sure if we are more wooed by the scenery that engulfs us, the food that entices us or the wine which we have all imbibed, but something sweeps us away tonight. Strangers, all of us, but now with some shared fulfilment. I have been to many of these kinds of dinners, most of them gluttonous and hedonistic endeavors when you really break them down.

But there is something to this one, Perhaps it is the wholesomeness of the farm — the Grier’s daughter playing in the grass while we stuff our faces with the very crops that sustain her family’s livelihood.

Perhaps it is seeing a large gathering of people who make a concerted effort to eat sustainably and who, more importantly, can afford to do so.

Or maybe it is that we are all just happy to be in a place where everything feels right for an evening; where we see the direct line from the sun to the earth where the crops grow, to the hand that picks them, to the chef that makes them delicious, so that they may, in the most literal sense, become a part of us. 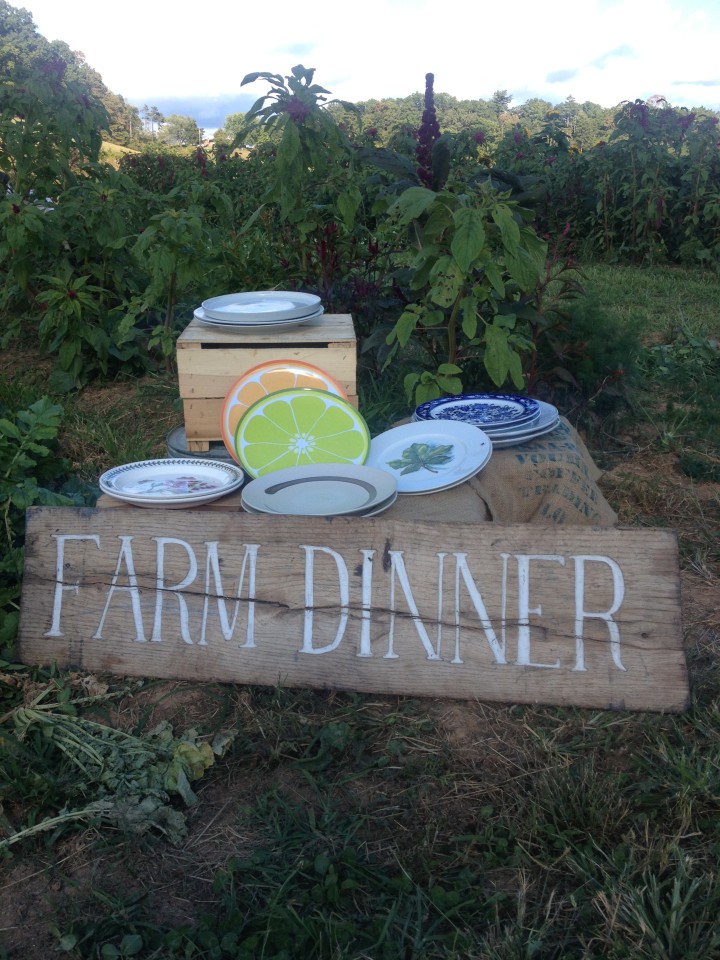 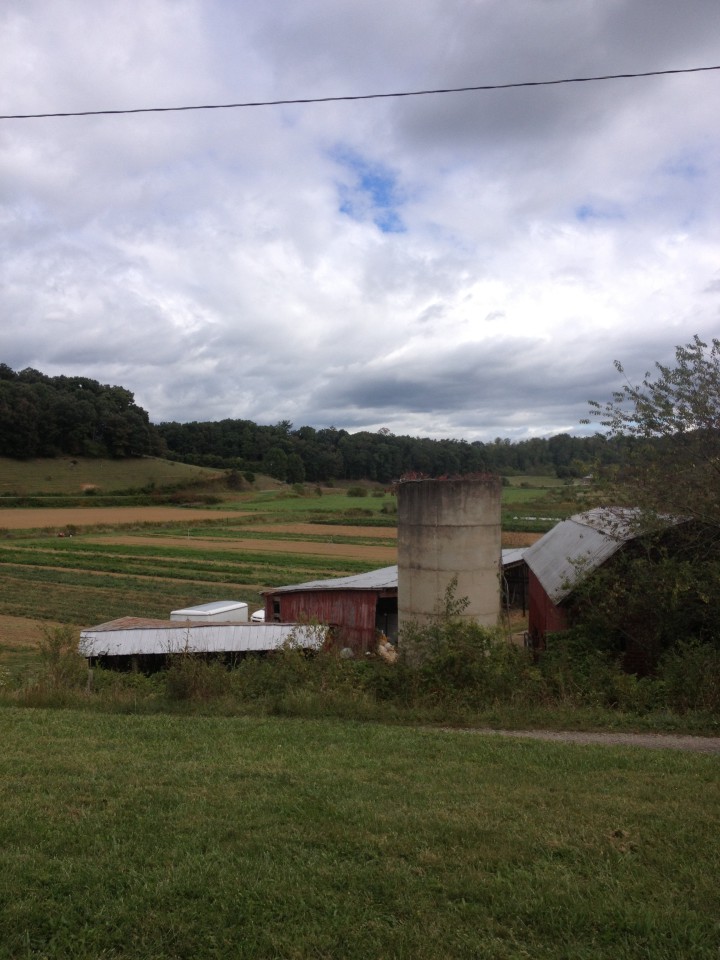 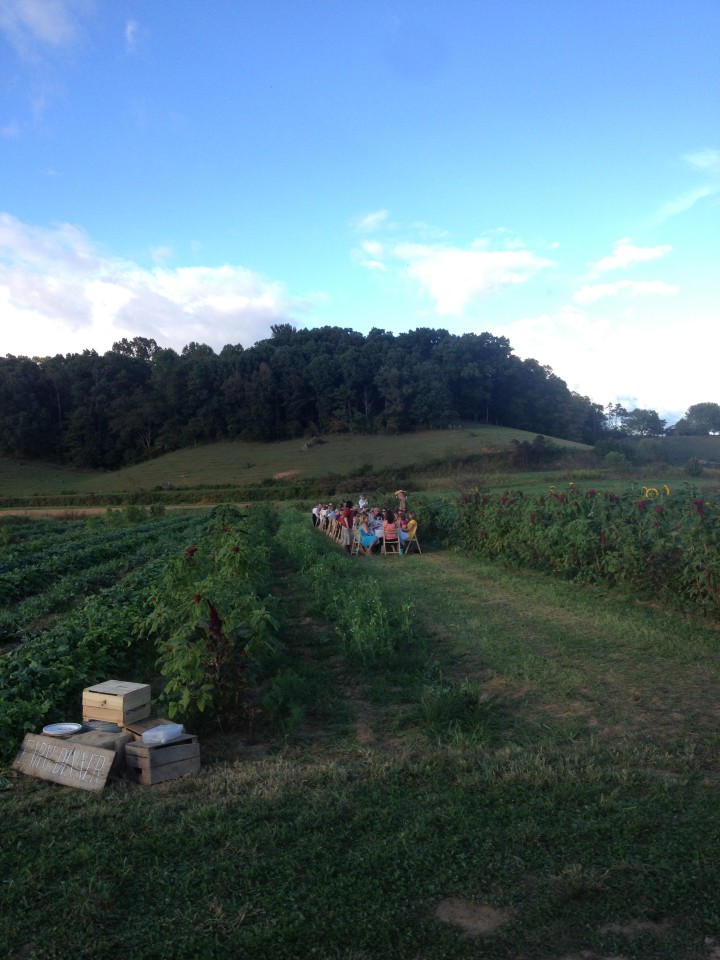 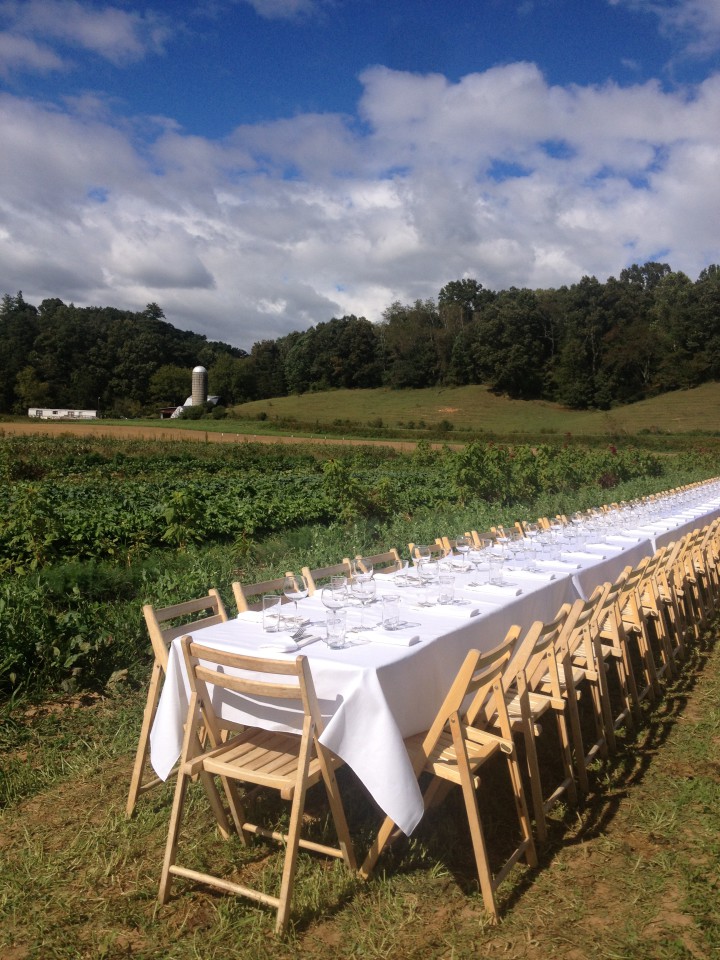 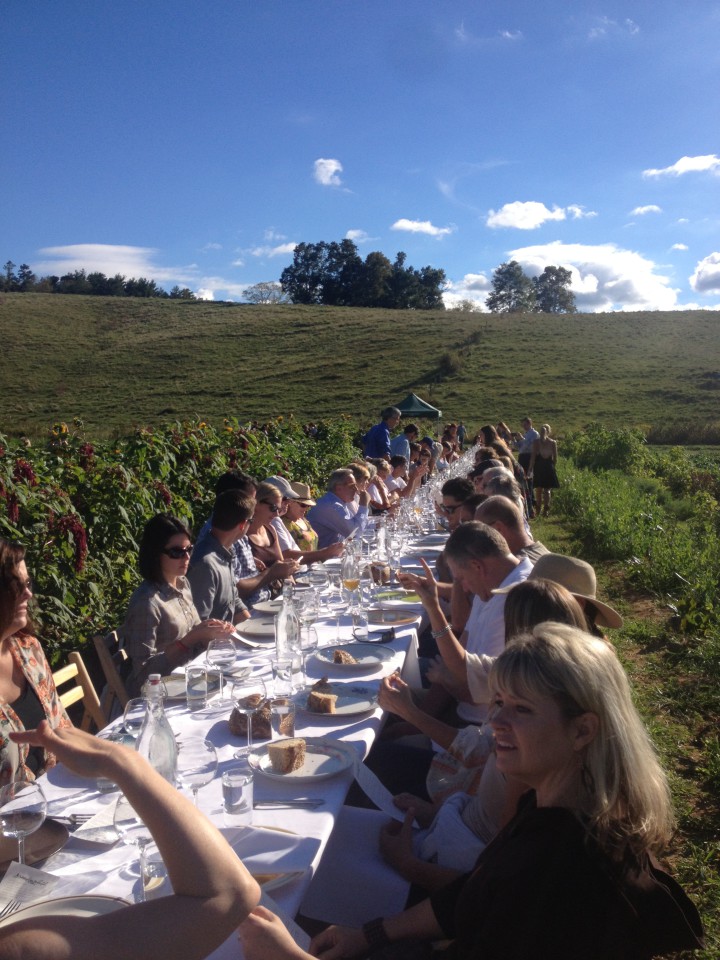 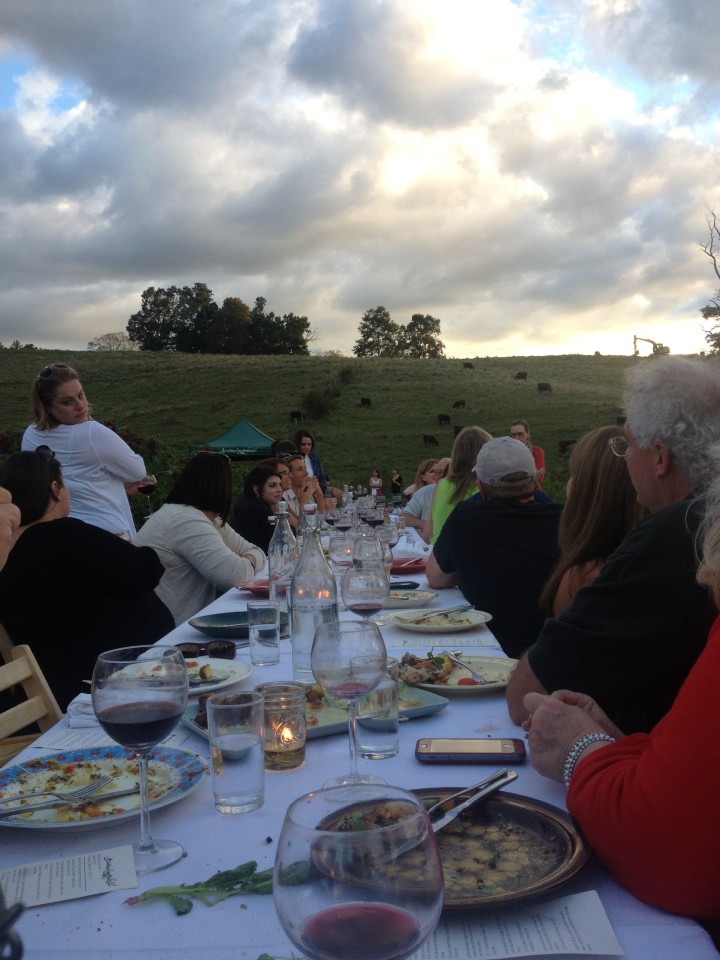