Amid allegations of cheating, Marc Hunt was declared the winner of the “Crosstown Rumbler,” a May 20 race that pitted members of Asheville City Council against each other as they biked, bussed, and drove from the UNC Asheville campus to city hall.

The multimodal race was organized as part of this week’s Strive Not to Drive campaign, which aims to encourage residents to find ways of traveling other than riding alone in cars.

The spread between all the racers was less than five minutes. And the idea behind the friendly competition was to highlight the feasibility of different local transportation options, said organizer Jim Grode, who chairs the city’s Multimodal Transportation Commission. “We’re excited about this opportunity to show people that multimodal transportation is a viable option for commuting to work,” he said.

However, Grode’s declaration that Hunt won the race on his bicycle was disputed by Davis, who beat his colleague last year by driving his car. “Marc cheated,” Davis said flatly as he walked up to the finish. 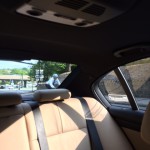 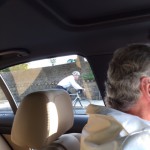 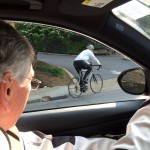 These photos show Marc Hunt darting into the left side of the road, pedaling towards oncoming traffic in order to avoid a red-light that stopped Jan Davis as the two Asheville City Council members raced in the Strive Not to Drive “Crosstown Rumbler.” Photos by Jake Frankel

He charged that Hunt took off from the UNC Asheville start line about a minute before the bus had pulled up and seemed to be breaking the campus speed limit as he charged down the hill. Even more damning evidence, which Davis cited (and this reporter witnessed and documented with the photos above): As Davis prepared to pass Hunt near the corner of Broadway Avenue and Woodfin Street, Hunt darted into the left side of the road, pedaling towards oncoming traffic in order to avoid a red-light that stopped Davis.

The rules stipulated that racers should abide by all traffic laws. North Carolina law gives bicycles the same legal status as vehicles, requiring bikers to ride on the right in the same direction as other traffic.

“That’s exactly the kind of biking behavior that really pisses drivers off,” said Davis as he observed Hunt zipping onto the Woodfin sidewalk. Later at the finish line, when confronted by the move, Hunt replied: “When I normally ride my bike, when it’s not a race, I don’t offend any drivers.”

Beyond their finishing times, Grode also developed a new weighted scoring system that took into account factors such as cost, health, convenience and environmental benefits when ranking the racers’ chosen transit mode. By those measures, Hunt maintained his first place position, with Wisler coming in second, Gordon in third, and Davis in last.

Knowing that the ranking system was stacked against him and his car, Davis joked, “The bikers won even before we started the race.” Although in the end he admitted that “there are tremendous benefits to biking,” Davis again declared with a laugh: “But Marc did cheat.”

This video shows the conversation at the finish line between Hunt and Davis, who accused him of cheating. Video by Jake Frankel

Strive Not to Drive events continue throughout the week.

As the city of Asheville continues to put more resources into encouraging multimodal transit, the debate over how drivers and cyclists should best share the streets has become a hot topic. And in the days since May 20, the racing incident sparked a lively online discussion about appropriate cycling and driving behavior. In addition to the thoughts posted to the comments field below this story, here’s a look at some of what’s being said via Facebook:

“Infrastructure is not built for bicycles, we are simply “ALLOWED” to use it. Bicycles don’t belong in the same places as cars, much in the same way that homemade ultralight airplanes don’t belong in the same space as 747s. But until ‘Merica decides to invest the same kind of money into bicycle infrastructure that it has in automotive infrastructure, we’re STUCK. It’s the obligation of the cyclist to protect him/herself, and sometimes that means operating outside of car-rules, i.e. running a stoplight.”  – Phil Shaw

“Infrastructure or not … what we have is what we have and what we have are current traffic laws and a majority that drive cars. Follow the laws and gain more respect. It is pretty simple. Stop at lights, don’t split lanes … don’t pass on the right … don’t blow through stop signs and stop lights. … In the interest of promoting equality on the road, obeying traffic laws is exactly what one should do. … I am very much an advocate of bikes … but the majority of people drive cars, and until the majority sees cyclists abiding by the same laws, they will never respect them.” – Ben Wiggins

“The problem is that bicycle advocates (whenever cyclists were given the “right” to operate on the roads) fought for us to follow the same rules, and then we all got screwed when they got what they wanted. Now it’s the law that we have to follow the same traffic laws as cars, even though it is completely ridiculous and life threatening. … What would be good is if more states would pass laws like Idaho, basically stop signs are yield signs, and red lights are stop signs (for bikes). This would solve a lot of problems; a: It just makes more sense, and b: then the car drivers wouldn’t get so pissed off if we were actually following the law.” – Adam James Winton