Edwin Gonzalez may have the best view in Asheville. From the garden he tends on the 14th floor of Battery Park Senior Apartments, you can see the whole city — if you look beyond the leaves and blooms of his container garden full of herbs, vegetables and many, many flowers.

“I like to mix my vegetables with flowers,” Gonzalez says. “It’s so pretty. You got to have flowers.”

Gonzalez has tended the rooftop garden at Battery Park for four years, taking over a smaller and neglected project. He learned to garden in his native Puerto Rico, where his grandfather was a pineapple and sugar cane farmer, but Gonzalez was always most interested in growing flowers. He kept a large flower garden at his home in Lexington, Kentucky for decades, but when he first moved to Asheville and his downtown apartment, he worried his gardening days would end.

“I thought I would miss gardening,” Gonzalez says. “But when I got to this building and I saw the garden that was here, I said, ‘Bingo!’ I’m going to make this awesome here.”

Gonzalez cares for the garden himself, watering it twice a day and sharing the bounty with his neighbors, who are free to use the herbs and enjoy (but not pick) the flowers. He draws his inspiration from Europe — the cities of Italy, Spain and Greece where he recalls flowers growing on every roof, every balcony, every cranny.

Looking out from Gonzalez’s garden, you can see the entire downtown skyline — but only a handful of other rooftop gardens. It’s more than were there a few years ago, Gonzalez says, but it’s not enough.

“It’s such a waste,” he says, shaking his head. “Look at that building there and look at all that space that is wasted on the top of it. This could be so beautiful.”

Scroll through the slideshow to see more from Edwin’s sky garden. Photos by Carrie Eidson

Gonzalez’s dream of a flower garden made from a mosaic of city roofs isn’t far off from the urban farm model many in Asheville are striving for — where every tiny space is being utilized.

“Ideally, that’s what an urban farm looks like,” says Safi Mahaba, co-founder of the Burton Street Community Garden. “You find these little patches that no one is using for anything and you turn them into a space for growing food.”

Mahaba says many in Asheville are working to make a network of tiny farms throughout the city, including the nonprofit Bountiful Cities, which she co-founded, and the for-profit Patchwork Urban Farms. But the idea of creating a series of satellite gardens has a special place in the Burton Street community, once an horticultural center that hosted E.W. Pearson’s agricultural fairs.

Inspired by the community’s history, Mahaba, her husband, DeWayne Barton, and others have already worked to turn a vacant lot and an unused part of a neighbor’s property into gardens that grow food to give to the neighbors. But Mahaba says she would love to see more gardens, an integrated patchwork that would someday become a business and bring money and jobs to Burton Street.

Of course, there are challenges to growing on a patchwork model, Mahaba says. A small lot is susceptible to being entirely wiped out by bugs, vandals or even neighborhood dogs.

Another challenge? Getting permission. And the first step in that process — figuring out whom to ask — is often the hardest.

Mahaba mentions two lots in the Burton Street community, left vacant after the owners had passed away. The properties were inherited by multiple people — distant relatives who lived in many different locations, with no executor of the estate.

The other problem with growing on vacant lots? Finding them. They’re disappearing fast, Mahaba says, as West Asheville becomes a more desirable place to live and work.

“Trying to find vacant lots in a place that has become really trendy grows more and more challenging over time,” she explains. “There is a weird synergy that happens when you create a good energy in a neighborhood and people want to be there — it actually leads to fewer resources being available to continue the things that attracted people to the neighborhood to begin with.”

In lieu of vacant residential lots, Mahaba says there is potential to use abandoned commercial properties or ask neighbors to donate even a tiny portion of their yard. The most effective approach is to focus on getting the spaces to work together, she notes, which requires participation, communication and — most essentially — knowing your neighbors.

“We like to have this notion that we should do everything ourselves, but there’s so much potential in collaboration,” Mahaba says.

So how small a space can used in a patchwork farm model? Pretty tiny, Mahaba says.

“So, let’s take these tomatoes, for example,” she says, pointing to a container garden on a 4-by-4-foot platform. “Any given tomato plant will put on six to 10 fruits at a time, and I’ve got five in this space. That’s more tomatoes than any one person can eat, which means that just one person can contribute a full crop of tomatoes for their neighborhood just from a space this small.” 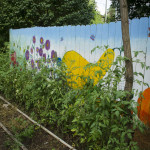 The garden gate at the Martha Jane lot was a collaborative art project between community members and local artists including Ian Wilkinson. (Carrie Eidson/ Mountain Xpress) 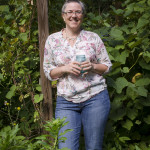 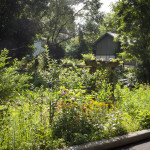 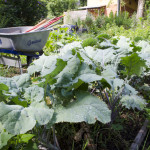 Many in Asheville may think their living situation doesn’t allow for a garden. Perhaps they live in an apartment building, have only a small yard, have a landlord who restricts use of the yard or move too frequently to establish a garden.
Falconhurst Community Garden is a backyard garden for people who may not have a backyard. It’s also a perfect example of something big that grew from something small.

The garden began 10 years ago, in a small space between two homes in West Asheville, when Abby Walker and her neighbor decided to grow vegetables for their families in a tiny communal garden.

“We would have to do a lot of things vertically to best utilize the space,” Walker says. “But growing for two families, you actually don’t need that much space.”

Over time, other neighbors became interested in participating in the neighborhood garden, but that would require a larger space. In the back of the Walkers’ property sits a hillside where five different properties converged — once “an extra, unmowed, unused space,” Walker says. Four years ago, Walker and her neighbors decided to turn part of that space into a communal backyard — now used by 10-30 community members to grow food and hold neighborhood potlucks and gatherings.

“Most people live within walking distance, but some people live further away,” Walker says, noting that the members include future community members — couples who are building homes in the neighborhood but haven’t moved in yet — and younger people who move frequently and aren’t able to establish a garden at home.

The communal garden also attracts people who don’t have any other green space, Walker adds — not uncommon in a desirable neighborhood like West Asheville, where the cost for renting or purchasing a home with a yard is more than many can afford.
“I think a lot of people want to live in a house with a garden, but there can be limited access to that,” she says. “So we want this to be a very open, communal space for people who don’t have that option.”

Besides, she notes, even if you have a yard, a communal garden can be a welcome alternative.

“People always get so excited in the spring and want to start a new garden,” Walker laughs. “But they say it takes 10 years to really establish a garden — it isn’t something you just do on a whim. It’s much easier to join something that is already established, where there are more eyes and more help. You get support from other people, and there’s a social component.”

Walker says she’s seeing more condominiums and apartments going up near the Falconhurst neighborhood and hopes that may bring more interested neighbors to the garden.

“There’s always extra food, and we still have more lawn we could use,” Walker says. “I would like to see more people join. Just like people get excited about starting their own garden, people get excited when they join this garden.” 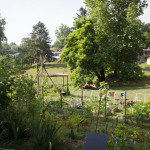 Allotment free: Walker says the Falconhurst garden does not operate on a plot system. Instead, each grower takes responsibility for a crop that will be shared with everyone. (Carrie Eidson/ Mountain Xpress) 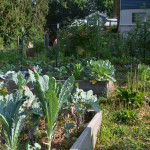 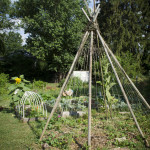 All the structures at the Falconhurst Garden, including a greenhouse and an arbor, were salvaged or built by volunteers. (Carrie Eidson/Mountain Xpress) 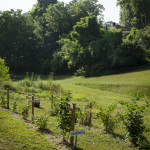 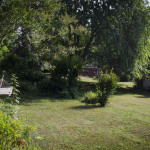