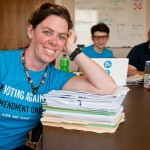 Against: Liz MacNeil, the Coalition to Protect All NC Families regional field coordinator, with two volunteers and a stack of pledges by people to vote against Amendment One. Photo by Max Cooper 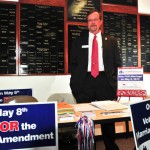 For: Buncombe GOP Chair Henry Mitchell says the local party will actively work to turn out Amendment One supporters. Photo by Bill Rhodes

“Constitutional amendment to provide that marriage between one man and one woman is the only domestic legal union that shall be valid or recognized in this State.”

On May 8, North Carolina voters will decide whether to add the above language to Article XIV of the state constitution. Titled “Miscellaneous,” the article mostly deals with less controversial matters, such as specifying the state’s capital and geographic borders.

But the appearance of those 27 words on the primary ballot represents the culmination of a protracted struggle by Republicans and religious conservatives to get an anti-gay-marriage amendment. For years, the Democratic leadership that dominated the N.C. General Assembly wouldn't let the measure out of committee. That all changed in 2010, however, as the GOP claimed a majority in both chambers, and Amendment One began rolling toward a vote.

Although state law already prohibits same-sex marriage, North Carolina is the only Southern state that hasn’t enshrined such language in its constitution. This reflects both Tar Heel politics, which are generally less conservative than those of our neighbors, and a Democratic reluctance to give their opponents an issue they could rally around. But this is still the Bible Belt, and some churches, along with local GOP organizations, are pushing to make the amendment law.

“In several states same-sex marriage has been imposed upon the people by courts that have engaged in tortured judicial reasoning," House Majority Leader Paul Stam declared in a written defense of the amendment late last year. "These courts have used the state constitutions to reverse the very pro-marriage policies that were in effect when the state constitution was adopted.

"Now it’s happening in North Carolina," he continued. "Same-sex couples in Asheville went to the courthouse for two weeks last fall seeking to obtain marriage licenses. … This marriage amendment will ensure that marriage between one man and one woman will be protected from result-oriented judges."

Meanwhile, North Carolina’s demographics have shifted significantly over the years, with growing (and increasingly visible) LGBT communities across the state and major cities — including Asheville — approving domestic-partner benefits and even endorsing same-sex marriage outright. An array of LGBT, civil-liberties and other groups opposing the measure have come together as the Coalition to Protect NC Families.

And as the decisive day approaches, both sides are marshaling their forces, ramping up their efforts, and preparing for a battle that, whatever its outcome, will be one for the history books.

Although Amendment One is often referred to as a same-sex-marriage ban, its potential ramifications are far broader.

To begin with, the state legislation creating the amendment includes another sentence, added to address private businesses' concerns about their own employee benefits, that won’t appear on the ballot: “This section does not prohibit a private party from entering into contracts with another private party; nor does this section prohibit courts from adjudicating the rights of private parties pursuant to such contracts.”

On March 31, speaking at the Buncombe County Republican Party convention, state GOP Chair Robin Hayes declared: "All [Amendment One] does is keep the law as it already is. … Don't be fooled by Democrats putting out misinformation that it does anything else."

But that's incorrect. Although it will fall to the courts to sort out the ramifications if the amendment passes, it clearly goes far beyond merely adding an exclamation point to existing state law.

Last November, four University of North Carolina law professors produced an extensive legal analysis of the amendment’s potential impact. Far from simply fortifying existing law, they asserted, it would strike down local ordinances and prohibit any form of domestic-partner benefits.

They also said the amendment could drastically roll back things like visitation rights and domestic-violence protections for unmarried heterosexual couples.

“It is impossible to predict definitively how broadly courts would interpret the Amendment’s prohibitions, given its vague and untested language,” the report states. “However, two things are clear: First, it will take courts years of litigation to settle the amendment’s meaning. Second, when the dust clears, unmarried couples will have fewer rights over their most important life decisions than they would have had otherwise.”

But Stam, who’s also an attorney, produced his own analysis, asserting that visitation rights, private contracts and domestic-violence protections would not be affected. “There is a real threat to the institution of marriage,” he concluded.

Still, even critics like Stam and the North Carolina Family Policy Council acknowledge that the amendment would eliminate local domestic-partner benefits — such as those the city of Asheville now offers its employees — and civil unions.

“This marriage amendment would recognize only domestic legal unions between one man and one woman,” Stam’s website notes. “Domestic partnerships or civil unions, whether opposite-sex or same-sex, would not be valid or recognized here.”

The fight over Amendment One has led to some unusual alliances.

The Coalition to Protect NC Families, for example, doesn't just include leftist and Democratic groups, but also the state Libertarian Party and a number of churches. Some business executives have also condemned the measure as harmful to the state's economy.

Still, many GOP leaders actively support it, including Speaker of the House Thom Tillis, though he’s also predicted that it will be repealed within 20 years.

Meanwhile, not all Democrats oppose the measure: 11th Congressional District candidate Tom Hill supports it, asserting in a recent debate that gays “have a genetic problem.”

Marching as to war

With one of the highest percentages of same-sex couples in the country according to census data, Asheville has been a focal point throughout the debate. But while city voters are likely to oppose the amendment, much of the rest of Western North Carolina is rural and more conservative — precisely the kind of area pro-amendment forces will have to carry to win.

The two sides are handling things quite differently on the ground. In many counties, the local Republican Party is leading efforts to promote the amendment, with some support from churches and conservative advocacy groups such as the Family Policy Council, the National Organization for Marriage and the Civitas Institute. The Vote for Marriage NC initiative is making some effort to coordinate the push, but no single organization is comprehensively managing the campaign statewide. Some Republican leaders have even sought to shift the focus to other issues: In the same Buncombe County speech, Hayes advised candidates to focus on jobs and the economy instead.

But while many Democratic politicans have denounced the proposal, it’s the Coalition to Protect NC Families that’s the driving force behind fundraising and organizing to defeat the amendment. The group kicked off its statewide “Race to the Ballot” campaign in Asheville in January. Since then, volunteers have raised money, held events, run phone banks, collected pledges and coordinated get-out-the-vote efforts.

Asheville native Liz MacNeil, who returned to the area to serve as the coalition's WNC regional field director, says she “hasn't had a day off since Jan. 24.”

“We've been talking about the harms … to women, children, unmarried couples (both same-sex and heterosexual) should this amendment pass,” MacNeil reports. “We've been educating the public. We're finding a lot of people here in Buncombe haven't heard of Amendment One or don't know the ramifications. Once they do, they're pretty strongly against it.”

On April 10, the Asheville City Council is set to approve a resolution declaring the city's opposition to Amendment One.

Meanwhile, the Buncombe County Republican Party is heading up local efforts to pass the amendment. A March 22 announcement from local party Chair Henry Mitchell declared: “Buncombe County voters will have the opportunity to forever preserve the definition of marriage in our State. As the only Southern State left that has not done so, we are finally getting the opportunity to take this to the people.”

In the same statement, Mitchell also promises that the party “will be actively working to get out the YES vote for this amendment.” He did not respond to requests for further comment.

5 thoughts on “Battle lines being drawn: Amendment One has passions flying”