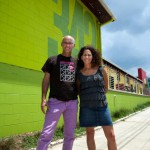 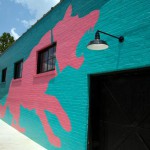 Pink Dog rising: Starting out as a three-foot-long anonymous graffiti tag, the dog (colored pink to make it less ferocious) is now the centerpiece of the colorful Depot Street building. 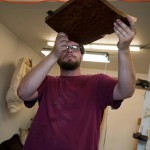 When Randy Shull and Hedy Fischer bought the future home of Pink Dog Creative in March of 2009, Depot Street was a very different place. The flood of industrial buildings turned artists’ studios that had already transformed much of the River Arts District hadn’t yet reached this area, and 372 Depot, part of the massive Glen Rock Depot development that now anchors the street, was still in the planning stage. The neighborhood renaissance, remembers Shull, “hadn’t turned the corner beyond Clingman Café yet … but we thought, ‘Let’s activate the building and make it really exciting with color.’”

For Shull and Fischer, Pink Dog Creative has been a long time coming. Shull, an architect, painter and designer, has worked in four different local studios over the past 20 years, and with a combined 50 years of living and working here, the couple sees the building as the culmination of their experiences in Asheville. “This is something we’ve built toward gradually; it didn’t happen overnight,” Fischer reports.

Inspired by the palette of Merida, the Mexican town where they spend much of their time, the pair decided to use bright colors to turn the former textile warehouse into an arts destination, and in May of last year, after the previous tenant had moved on, Shull began painting the various street-facing sections of the 20,000 square foot structure, creating a panorama of greens, yellows, oranges, reds and blues.

“Asheville is unique in the sense that people do want to go into a comfortable, familiar place that is owned by someone in town, and they make those connections, and [they] value that. So having so many local small businesses, people in town are into supporting [them] and making it a priority” — Matt Schnable, co-owner, Harvest Records

Then along came the pink dog. Originally a 3-foot-long stencil bequeathed by a graffiti artist, the image attracted plenty of attention. Inspired, Shull and Fischer decided to incorporate it somehow. “While I was painting the building, people would walk by and they’d say, ‘What about the dog?’” Shull recalls. After mulling it over, he created a much larger version of the original, later painting it pink to make it look less ferocious.

The strategy paid off: Three months before the official opening, all 15 of Pink Dog’s artist spaces were already leased. Today, the repurposed structure houses artists working in a wide variety of media, from painters and sculptors to bookbinders and furniture makers.

Collage/pastel artist Ginger Huebner and painter Ralston Fox Smith have shared studio space in the River Arts District since 2007. The two moved to Pink Dog last June, and both say it’s been a positive experience. “I feel like we fit the space better; it’s more unified. And the community? You couldn’t ask for more,” Huebner reports.

That sense of community is also part of what attracted furniture-maker Seth Weizenecker. “I love the space,” he says. “I think it’s going to help pull a lot of people down [to the area] and help expand the River Arts District a little bit. It’s been nice to come down to this building and have a bunch of other artists here.”

“We bring people down there that might not otherwise visit the studios, and they bring people to us who might not know that there’s a restaurant there,” she explains. And because the building was designed as a destination, the restaurant already boasts some regulars, which might have taken longer to achieve in a less visible location, notes Triber.

Meanwhile, Pink Dog Creative is also the Asheville Area Arts Council’s new home. Last year, Shull was part of a group of arts-community leaders brought in to help the nonprofit retool its core mission. He suggested relocating to Pink Dog, which the organization did back in January. It’s been a great fit, says Interim Executive Director Graham Hackett. The new space (dubbed the Artery) “is incredibly dynamic and versatile for everything that we want to be doing,” including exhibits and workshops, says Hackett.

And for Shull and Fischer, that fertile mix is precisely what makes Pink Dog Creative special. Both are enthusiastic about recent developments in the neighborhood. “Four individual buildings have been bought by artists since we’ve bought this one,” Shull reports. That only reinforces the kind of cross-pollination the two have tried to foster via Pink Dog — an environment where artists can thrive.

“It’s nice to be amongst a creative community,” says Fischer. “It’s better than being around guys who change tires,” adds Shull.

— Send your local business news and tips to business@mountainx.com, or call Christopher George at 251-1333, ext. 140.