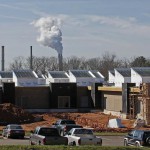 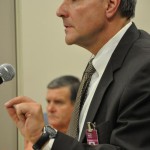 The Buncombe County commissioners garnered a mix of scorn and praise at their June 7 meeting, as they invited the public to weigh in on the proposed $303 million total budget for the fiscal year that begins July 1.

The plan calls for a 1.7 percent increase in general-fund spending, due mostly to rising social-service and health-insurance costs, plus the planned opening of two new intermediate schools. However, the proposal dodges any tax increases, instead relying on a mix of spending cuts and a $7.9 million infusion from reserve funds.

County department heads shaved projected expenditures by $7.9 million compared with this year, primarily by eliminating 93 staff positions, County Manager Wanda Greene explained while reviewing the budget. But only a few of those employees will be left without jobs, she noted: Most will now work for private contractors taking over services formerly provided by the county, such as prenatal care; others chose early retirement. Greene also stressed that she doesn't expect the county to actually use the reserve funds included in the budget.

But those numbers didn't sit well with Fairview resident Mike Fryar, a former Republican candidate for commissioner, who said the county is still spending too many taxpayer dollars. He was particularly critical of the Sheriff’s Office, which requested $1.4 million more than it got this year — despite having made more than $527,000 in spending cuts, compared with the current year.

Fryar also took aim at a plan to spend $464,400 renovating a 9,000-square-foot building at 200 College St. that the county bought in December 2009. The space will house a new, larger meeting room for the commissioners as well as offices for them, the county manager, county attorney and their support staff. Fryar called the project a "total waste of money."  After the county shifts to district elections next year, he suggested, the commissioners should use existing office space at libraries and fire departments.

After the meeting, Fryar revealed that he's considering another run for commissioner in 2012, but he’s waiting to see how state legislators redraw the districts later this year.

Fellow Republican Don Yelton, another former candidate for commissioner and a frequent critic of the current board (all of whose members are Democrats), also had harsh words for the county's budget. "Keep on doing what you're doing: Ignore the people," he urged sarcastically, adding: "It's wonderful. Because eventually they're going to get fed up. … The people are broke."

Another point of contention was the proposed fee increases for Planning Department services such as erosion-control permits, rezoning requests and mobile-home-park permits. Currently, a permit for a park with less than 20 units costs $150; for larger parks, it’s $200. The proposed budget increases both fees by $50.

Tom Christ of the Western Manufactured Housing Association said the hikes would hurt developers already struggling in a tough economy. And together with existing zoning rules prohibiting new mobile homes in residential districts, they amount to an assault on affordable housing, he asserted, urging the commissioners to adjust the fee amounts.

"There's no one on this board that doesn't support public housing,” he declared.

Taxpayers, added Gantt, are already subsidizing development activities, because the fees don't cover the actual cost of those services. “I think that someone who is not using the service should not be paying for it,” he said.

And even the proposed increases won't make up the difference, noted Greene, saying she expects the additional revenue to be so minimal that she didn't even take it into account in the department's budget projections.

In response to residents’ requests, however, the commissioners agreed to hold another public hearing on the proposed fee increases at their June 21 meeting, before voting on the 2011-12 budget.

Not all the feedback was negative, however. Officials from A-B Tech as well as the Asheville and Buncombe County school systems heaped praise on the commissioners for holding the line on education funding despite massive state cuts.

The proposed budget allocates $48.8 million for the county schools, a 5.6 percent increase over this year’s amount. Most of the additional money will cover the cost of building and operating two new intermediate schools, Superintendent Tony Baldwin explained. In the last four years, the system has lost some $30 million in state support, he noted.

Those cuts have come despite "incredible needs in our school community," said Baldwin, adding that over the last decade, the percentage of students in the system receiving free or reduced-price meals has climbed from 34 percent to 52 percent. Federal stimulus dollars, he continued, "temporarily averted a crisis" last year, but the future looks bleak as more federal funding is expected to dry up while state support remains low.

Several commissioners assured him that the system has the county's strong support. "You've done an excellent job when the legislators are doing everything they can to destroy our public education," asserted Vice Chair Bill Stanley, a former Asheville High School principal, adding, "They're crazy."

In other business, the commissioners unanimously voted to accept a free 700 MHz simulcast radio system in exchange for a 10-year service agreement with Cassidian Communications for “an amount not to exceed $3.75 million.” That’s substantially less than the county’s current radio agreement costs, noted Greene. The roughly $6 million system will expand radio coverage from about 53 percent of the county to about 85 percent and will be less susceptible to interference, said county officials, explaining that the company now does most of its business outside the U.S., and it’s donating the system as part of a strategy for establishing itself here.

2 thoughts on “Getting and spending”