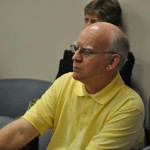 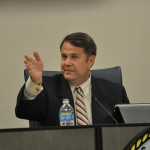 Depending on whom you ask, a recent change to Buncombe County's election law is either a blatantly partisan Republican dictate from Raleigh or a much-needed adjustment to restore balance and fairness to local government after an unduly long period of Democratic rule.

Ratified by the state Legislature May 19 after House and Senate votes that mostly followed party lines, the law expands the Buncombe County Board of Commissioners from five to seven members and mandates district rather than at-large elections. The three districts will match the county’s three Statehouse districts, which are now being redrawn in accordance with the 2010 census. Next year, each voter will be asked to choose two commissioners (who must live within that district) plus the board chair, who’ll still be elected countywide.

Republican Rep. Tim Moffitt introduced the changes in March, without consulting or even informing either his colleagues in the local legislative delegation or the current commissioners, all of whom are Democrats. They unanimously oppose the move; board Chair David Gantt has asserted several times that it will limit democracy by preventing residents from voting for all the commissioners.

Under Moffitt's leadership, the Republican-controlled Legislature shot down amendments proposed by Rep. Patsy Keever and Sen. Martin Nesbitt (both Buncombe Democrats) requiring a binding referendum on the bill.

Moffitt says the measure will make commissioners more accountable to underserved areas of the county while giving less prosperous candidates in both parties a better chance of winning.

Lines in the sand

These changes could have long-term ramifications for county government and the general public, says UNCA political science professor Bill Sabo.

"Everything depends on how the districts are drawn," he reports. "The power rests with those who draw the lines."

That power now falls to the first Republican-controlled General Assembly in 140 years. Historically fraught with lawsuits and charges of gerrymandering, the redistricting process for Statehouse, Senate and congressional districts is overseen by House and Senate redistricting committees. Both Moffitt and Buncombe Democratic Rep. Susan Fisher serve on the House committee.

At an April 30 public hearing on redistricting, Moffitt promised that the districts would be fair; at this writing, no details or maps had been released.

Sabo, however, says the county "could be gerrymandered easily to make four of the [current] commissioners live in the same district, which would create dramatic change." At the very least, he expects to see a board that’s "a bit more conservative," adding, "It's going to ensure one or two Republican seats."

"If they [place the areas] where all the liberals live in one district, certainly that's going to encourage those who are more extreme ideologically," Sabo observes. "What we're likely to see is commissioners who are more tuned to their districts, as opposed to the county as a whole. It's likely that you'll get a much more divided commission on divisive issues such as zoning."

Each district must contain about one-third of Buncombe County's roughly 238,000 residents. That still leaves plenty of room to draw the maps in ways that could help Republicans, however, notes Sabo.

Asheville’s approximately 80,000 people (and large Democratic majority) could legally be encapsulated in a single district — or Republicans could try to subdivide Asheville "in hopes of watering down the urban vote with the rural vote, which tends to be more conservative," he points out. But with the county’s registered Democrats outnumbering Republicans 77,000 to 48,000, it seems likely that Democrats will be able to keep at least a few seats on the board.

Whatever the outcome, critics have strongly objected to the way the change was made.

"Shooting down the requests to hold a referendum was a red flag," says Kathleen Balogh, president of the League of Women Voters of North Carolina. The nonpartisan political group works to educate voters and promote open government. “Because basically you're disenfranchising local people from having input into a situation that directly affects them. There was no opportunity for citizen involvement and education: It happened so quickly that people were barely able to gather their wits about them to even understand what was happening before it was passed."

Gantt agrees, declaring, “If you're going to take away someone’s right to vote for all these commissioners, you should've asked them. I think we may be one of the only areas in the state where Raleigh drew our districts for commissioners. And for a party that preaches home rule and local control and 'Keep it close to the people,' it was certainly a surprising move."

Typically, counties switch from at-large to district elections only if the current commissioners request it or in response to litigation, notes Todd McGee, communications director for the N.C. Association of County Commissioners. McGee says he's not aware of any other North Carolina county that uses Statehouse districts for commissioner districts. Only 15 of the state’s 99 other counties use the combined district/at-large voting Buncombe will now employ; 42 use “pure” at-large elections, according to figures from the Raleigh-based organization.

But Henry Mitchell, chair of the Buncombe County Republican Party, says the new system will actually be more democratic.

"I think the bill allows for candidates with less funding to serve the community, because the grass-roots efforts will be more effective," he explains. "I think it will give the average person a better chance to serve."

Not an ideal world

Meanwhile, local Republican hopefuls are eager to explore their prospects under the new system.

Fairview resident Mike Fryar, who ran unsuccessfully in 2008, wants to see how the districts are drawn before deciding whether to throw his hat in the ring. Fryar raised his profile back in February by pointing out during a Board of Commissioners meeting that they were among the highest-paid county commissioners in the state (two weeks later, they cut their pay from about $41,000 a year to $28,600). Fryar says he hopes he'd have a better shot at winning under the new law, because he wouldn't have to stretch his limited resources as far.

Candler resident David King is also considering a bid; he, too, thinks the change will help give him a fair chance.

"If you rig the system like it's been for 140 years, then somewhere, balance has to be put back in," he explains. "In an ideal world, I'd like to see local control, but it's not an ideal world, unfortunately."

Fryar agrees, saying, "Raleigh has always made the rules, and we've had to follow them. I'd rather have local governments have more control, but as long as they want to play the games down there the way the games are played, we have no options."

"You move to this town three years ago and you decide we need greenways, sidewalks, parks; dig up all the asphalt and put in more green spaces, change the whole city? We've been here all our lives, born here, and we liked it the way it was," he asserts.

But Democrats are also mobilizing in response to Moffitt's legislation. "A plurality of people tell me they’re concerned with the way our voting rights are being handled in a clearly partisan manner in the state capital," says Emmet Carney, chair of the Buncombe County Democratic Party. He raises the specter of a voter uprising against Moffitt and his party.

Sabo, however, doesn’t think a sustained citizen backlash is likely.

"I can't see it having an impact for more than one or two elections. … Once the lines are drawn and people are used to it, that kind of stuff starts to wash away," Sabo explains. "In one sense, the Republicans are wielding power quite effectively to alter the political landscape. On the other hand, they're doing it in a way that … contravenes the fundamental principle of the party."

One thought on “Balancing act?”