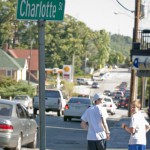 When views collide: On June 26, Council passed a study to gather more information about what improvements (if any) should be made in the Charlotte Street corridor. Photos by Max Cooper 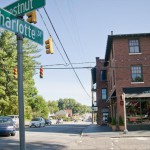 Staff studies aren't usually particularly controversial. But a proposed traffic-engineering study for the Charlotte Street corridor got some pushback at the Asheville City Council’s June 26 meeting.

Some area residents said the $50,000 study is an unnecessary expense — and the first step in trimming the number of lanes on Charlotte Street from four to three, which they fear will cause problems in the area.

“There has been no real public hearing; it was just a dog-and-pony show,” longtime resident Tom English declared. “There are a number of businesspeople opposed to this.”

Asheville native Jerry Sternberg, a local developer, compared the city's studies to a gambler repeatedly pulling the lever of a Vegas slot machine, hoping to hit the jackpot.

“We keep putting money in and not getting the desired result, so the only way to get the result is to read the machine differently,” he said. “This is not about bicycles; this is not about pedestrians. This is really about a very small group of influential, proprietary elitists who want to discourage traffic going through their neighborhood.”

Jamison Judd, representing Buncombe County Emergency Services, said they did have some concerns about emergency-vehicle access with one less lane on Charlotte Street. Traffic-calming measures in the area have already caused a number of difficulties, he maintained.

But according to city Transportation Director Ken Putnam, this study is different from previous ones because it would collect more specific data. Reducing the number of lanes on Charlotte Street, he noted, is an option the study will investigate, but far from the only one: He hopes the data obtained will lay out the potential impacts of various options.

“This will tell us which options are worth exploring,” added Putnam. “I can't get a definitive answer of which way we're going to go.”

Other city residents voiced support for the study, feeling it will give them a better understanding of how to improve the area.

Earlier this year, an informational meeting on possible street improvements in the area drew almost 200 people and revealed sharp disagreement over the lane-reduction idea, but staff said there was consensus on improved sidewalks and a number of other issues.

Council member Gordon Smith said studying improvements to the corridor is part of Council's broader effort to enhance the unique feeling of each area of the city.

“It's been a priority of this Council to strengthen neighborhood identity, and one way to do that is something called 'place-making,'” Smith explained. “That means creating more walkable communities with distinctive identities.”

He noted that while he’s leaning toward fewer lanes on Charlotte Street, he wants the study to shine more light on the question and wouldn't favor it if the data showed that the problems would outweigh the benefits.

Council member Cecil Bothwell noted that when College Street was drastically narrowed in 2006 and a roundabout was added, few would have believed that traffic would actually be less congested afterward.

“That keeps right on moving, and it happened at UNCA and Clingman Avenue too: Who would have predicted that who didn't have the relevant expertise?” he said.

Council member Jan Davis noted that he had concerns about reducing the number of lanes but trusted staff's assertions that the study would reveal more about the various options. In the end, no Council member apparently found the concerns persuasive enough to derail the study, which was approved 6-0. (Council member Marc Hunt was absent.)

In other action, Council:
• Rejected proposed signage for the Oteen Ingles on a 3-3 vote. Bothwell, Smith and Council member Chris Pelly all voted against, saying they don’t believe the grocery-store chain should continue getting variances from the city's signage rules. Davis and other supporters said that while they didn't find situation ideal, the city's current rules are out of date.
• Voted 6-0 to make Asheville the nation’s first Bee City, USA. Proponents, some dressed as beekeepers, cited the city's long tradition of backyard beekeeping and local honey-making, as well as a need to encourage pollination and a healthy ecosystem. The city will establish a pollination subcommittee of the Tree Commission and use pollination-friendly trees in the future.
• Approved a ban on tobacco sponsorships at future city festivals (particularly next year's Bele Chere) on a 6-0 vote.