We don’t often see downtown Asheville without traffic these days. However, if you were downtown on Sunday, Sept. 17, you were greeted with a refreshing change in atmosphere thanks to the organizers of a unique community event, Open Streets Asheville: Shape Your City.

During this event, a handful of roads are blocked off, closing a large area of downtown to automobile traffic. On Sunday, the streets were filled with pedestrians, skateboards, scooters, tricycles, bicycles and even several unicycles. The event website states, “The Open Streets Asheville movement promotes active lifestyles; builds community; and inspires advocacy through free, interactive fun on our largest public spaces – the streets. Enjoy no-cost activities for all ages including free yoga, dance and gymnastics, community art projects, and a bike skills clinic especially for kids.”

According to the Open Streets Asheville website, “new for 2017 is the call for those enjoying active community in the streets to become advocates in shaping Asheville’s future. Shape Your City 2017 provides the inspiration and tools for residents to join in local and regional efforts to build a happier, healthier Asheville.”

Candler resident Joe Shearin was attending with his granddaughter. “It’s nice for the kids, it’s nice for everybody to come out and have plenty of things to do, and not have to worry about safety from traffic. It’s like one big playground.”

The Watford family were visiting Asheville from Raleigh, their vacation destination chosen at the last minute after their Florida trip was canceled due to hurricane Irma. “We saw the event on Facebook, and we were like ‘Perfect!'” Their son Ben was cruising through an obstacle course on a bicycle loaned from a community bike corral, but told Xpress he enjoyed the popcorn perhaps the most.

A very popular activity area of the day was an interactive music station in Pritchard Park that was sponsored by UNC Asheville Music Department. The crowd enjoyed playing several different kinds of percussion instruments such as drums, bells, xylophones, and even a large gong. Both kids and adults alike took turns with the plethora of instruments throughout the park.

Another one of the standout activities that seemed to draw a steady crowd, both last year and this year, was the Asheville Jam activity area. Asheville Jam is a local dance organization specializing in a style of dance called “Contact Improv.” One of the Asheville Jam organizers, Idelle Packer, told Xpress that Contact Improv is a type of experimental dance that explores the physical space with a partner (or partners) in a unique way. Asheville Jam also had a hand in helping transform the downtown landscape working with Open Streets Asheville organizers. Packer recalls, “The question was, if there were no cars in the streets, what would you want to do? I said I would want to dance in the streets!” Asheville Jam hosts a contact improv “jam” every Saturday with details on their website AshevilleJam.com.

Local artist Cyrus Glance also created sidewalk chalk art outside of Foggy Mountain Brewpub on Church Street throughout the day, inviting anyone who wished to grab some chalk and join in.

The event also included many street busking musicians and performers, including the performers of the New Orleans- inspired group Asheville Mardi Gras and the Asheville Second Line. One of these performers was Kenny Cowden, who also closed the event with a finale performance of juggling and tricks on an unusually tall unicycle. He told Xpress what he loves about Open Streets Asheville is that “it’s definitely a great local-friendly event. It’s a great taste of Asheville, and we’re already looking forward to next year!”

All photos by Adam McMillan 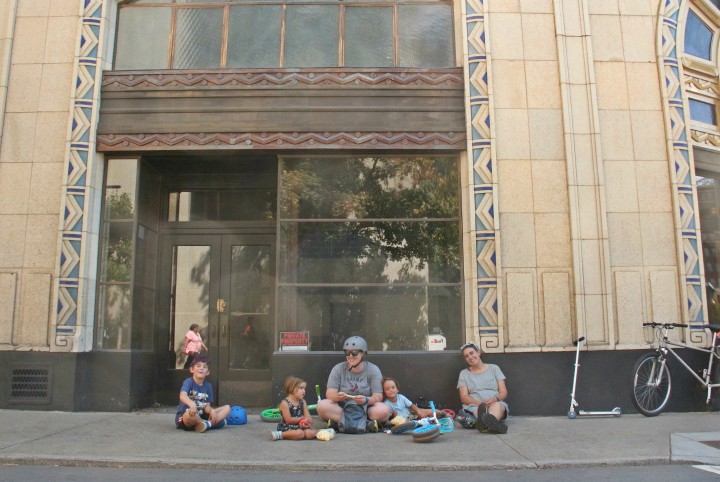 The Archer family enjoying a mid-day “snack time” in front of the old S&W Cafeteria building on Patton Avenue. 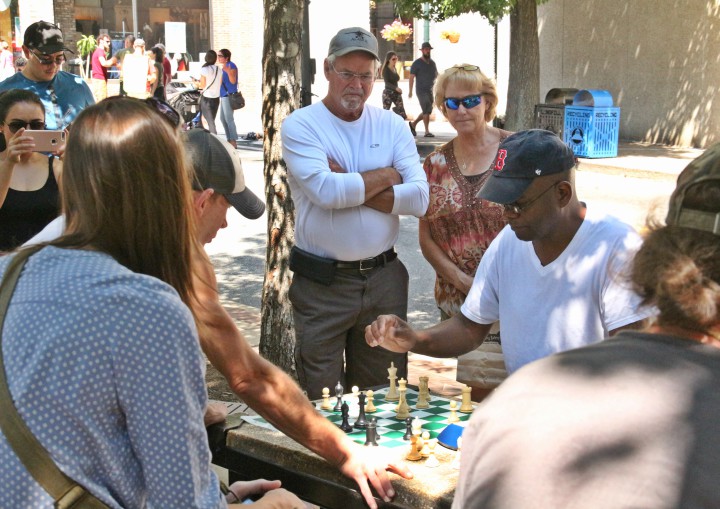 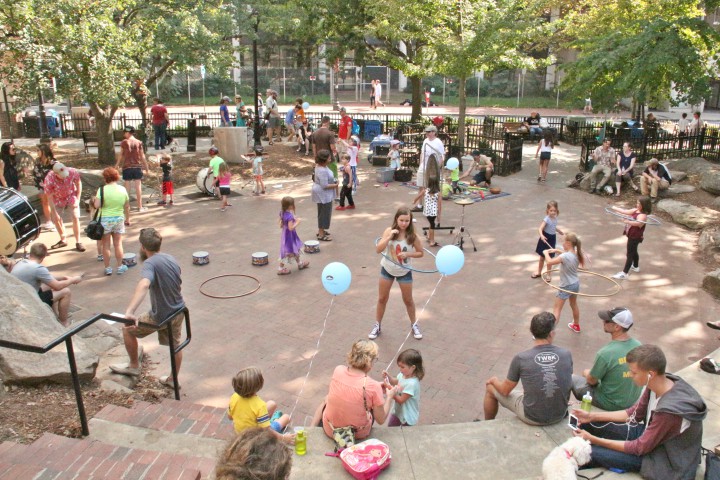 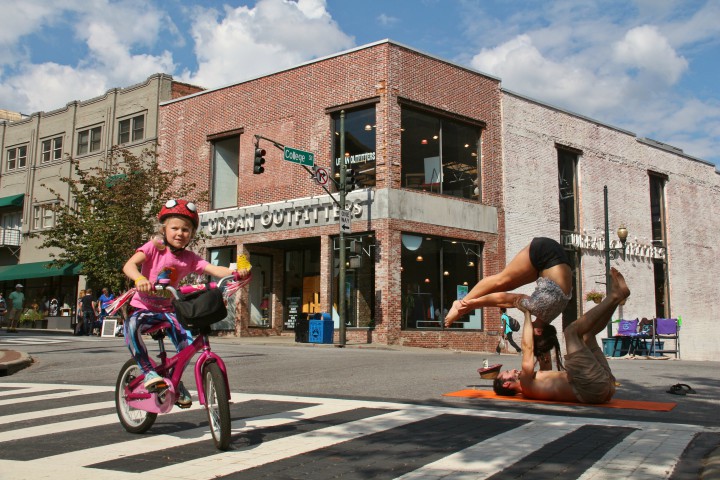 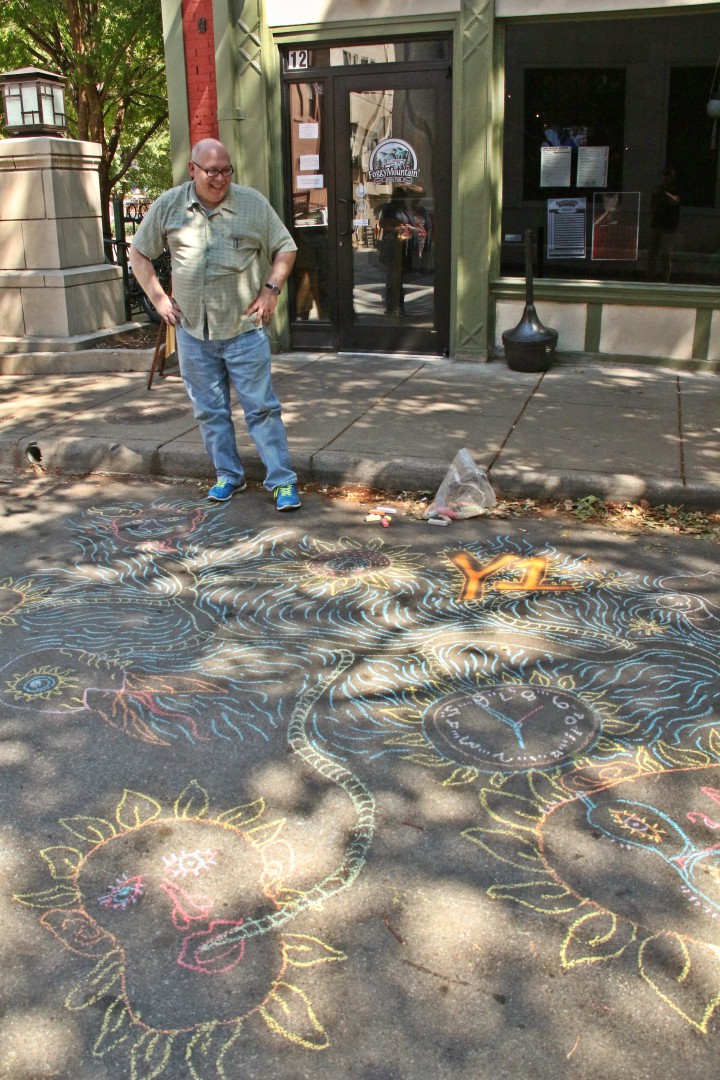 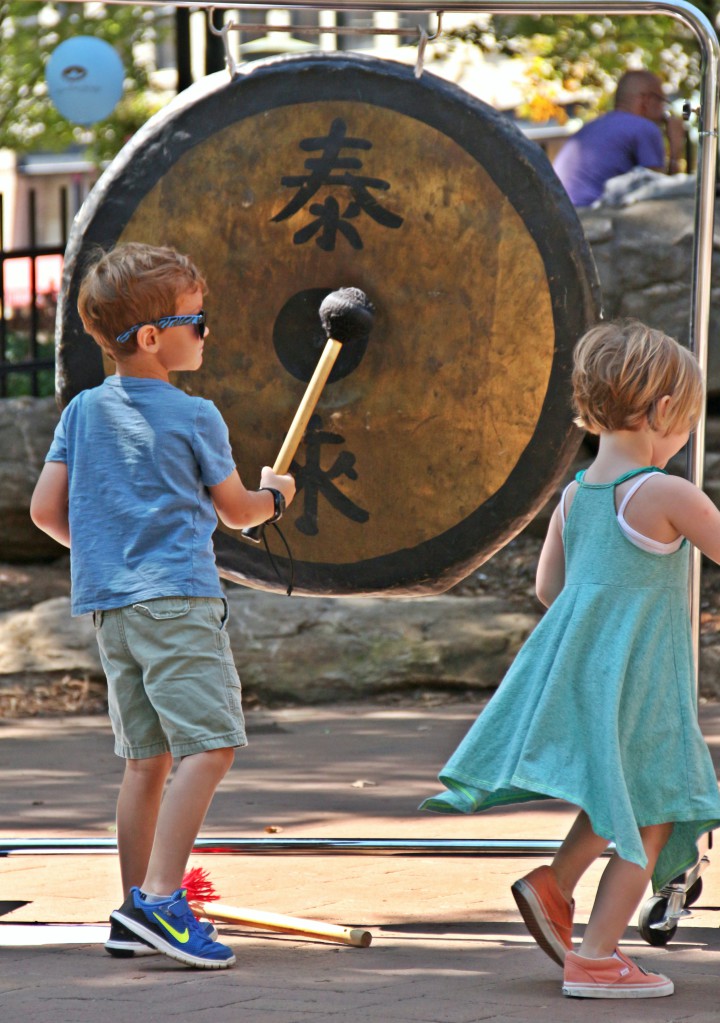 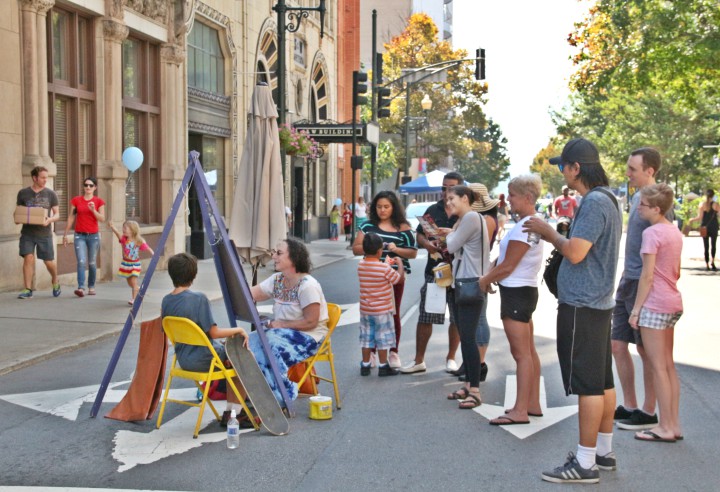 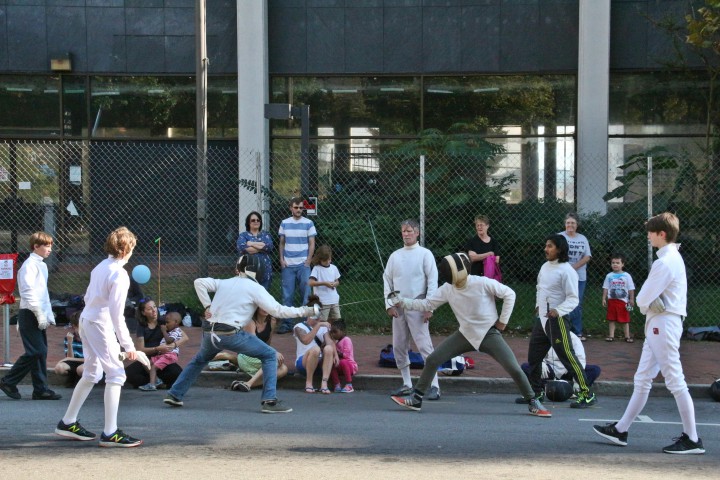 Fencing returned as a fun activity for Open Streets Asheville this year. 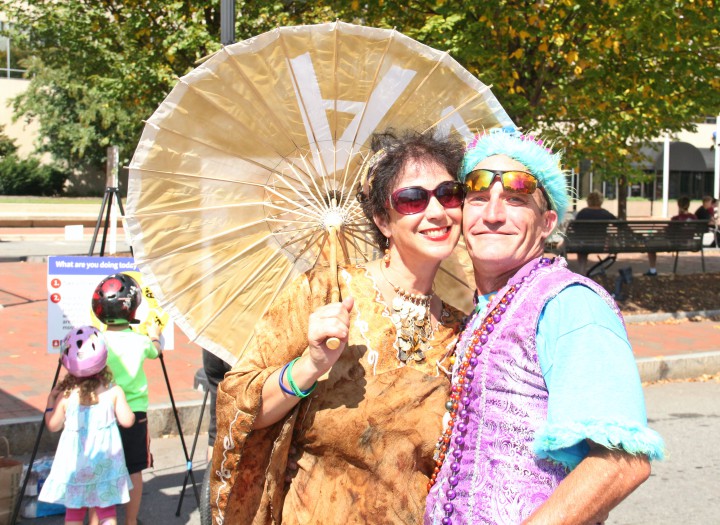 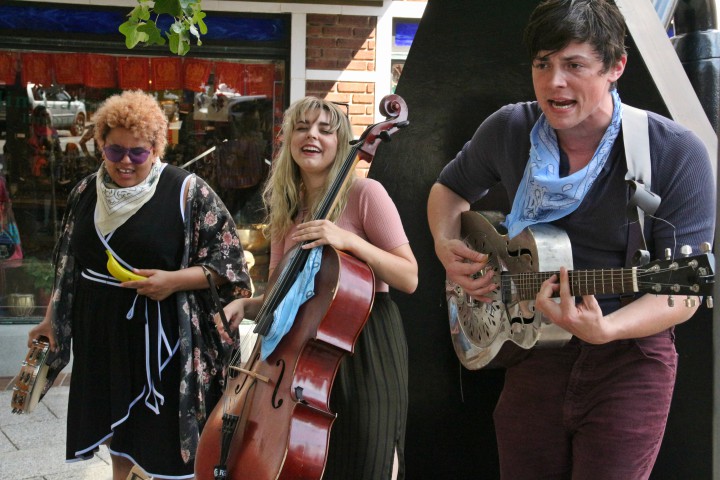 Bandits On The Run busking at the flat iron on Wall Street during Open Streets Asheville. 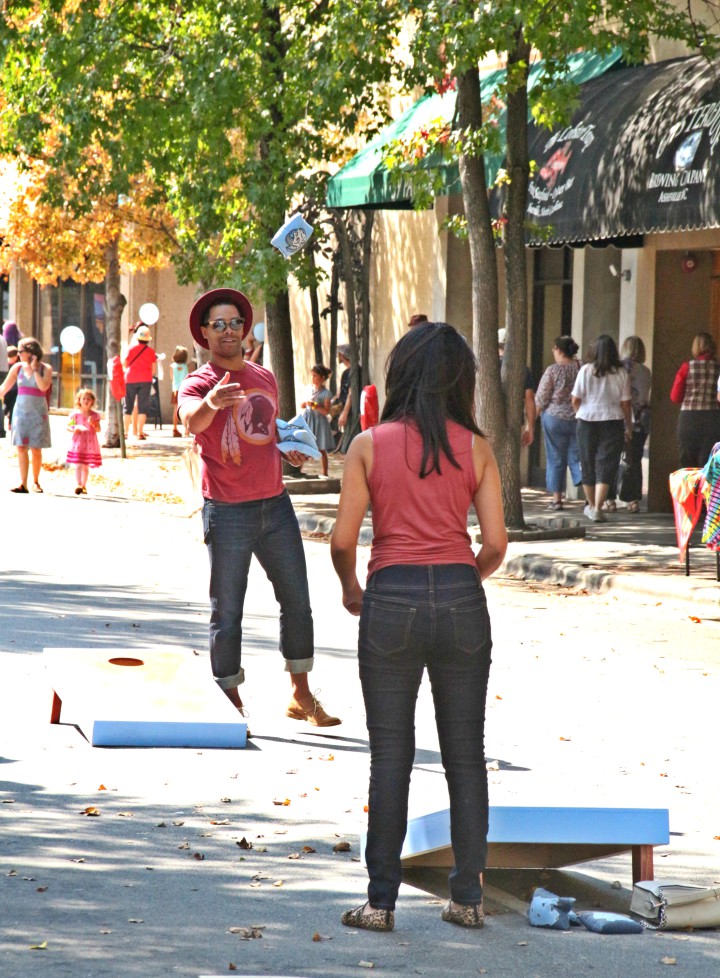 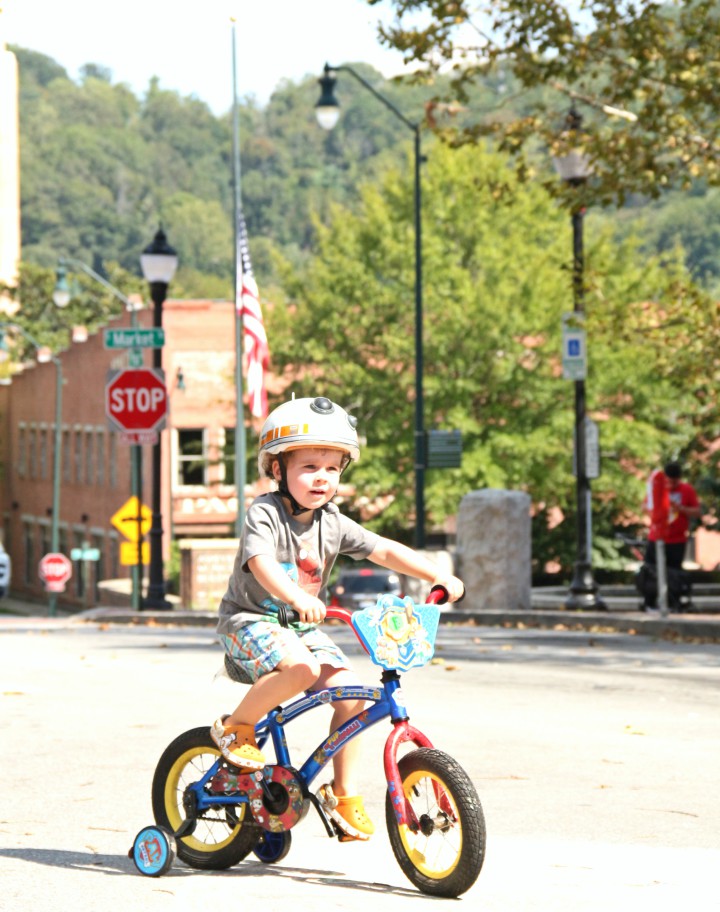 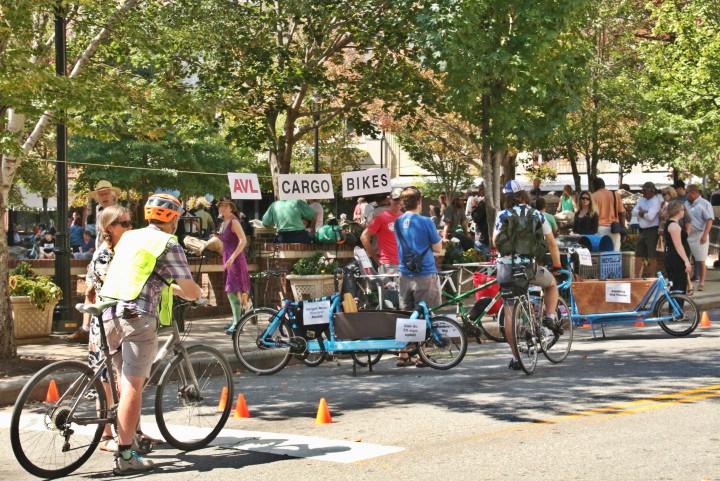 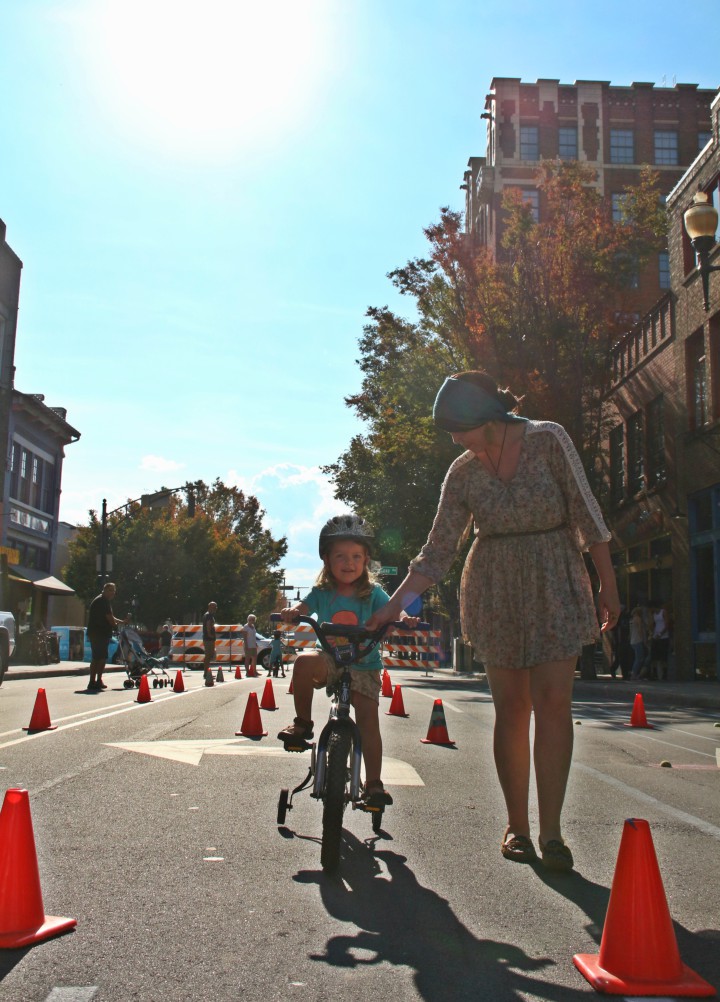 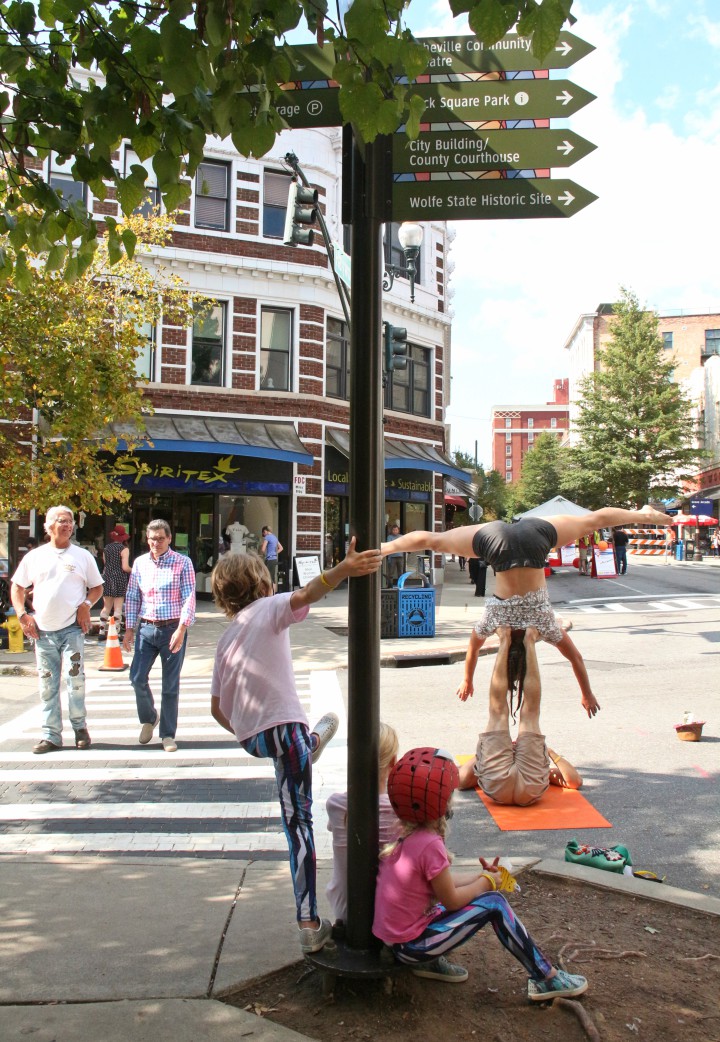 Yoga in the streets of downtown. 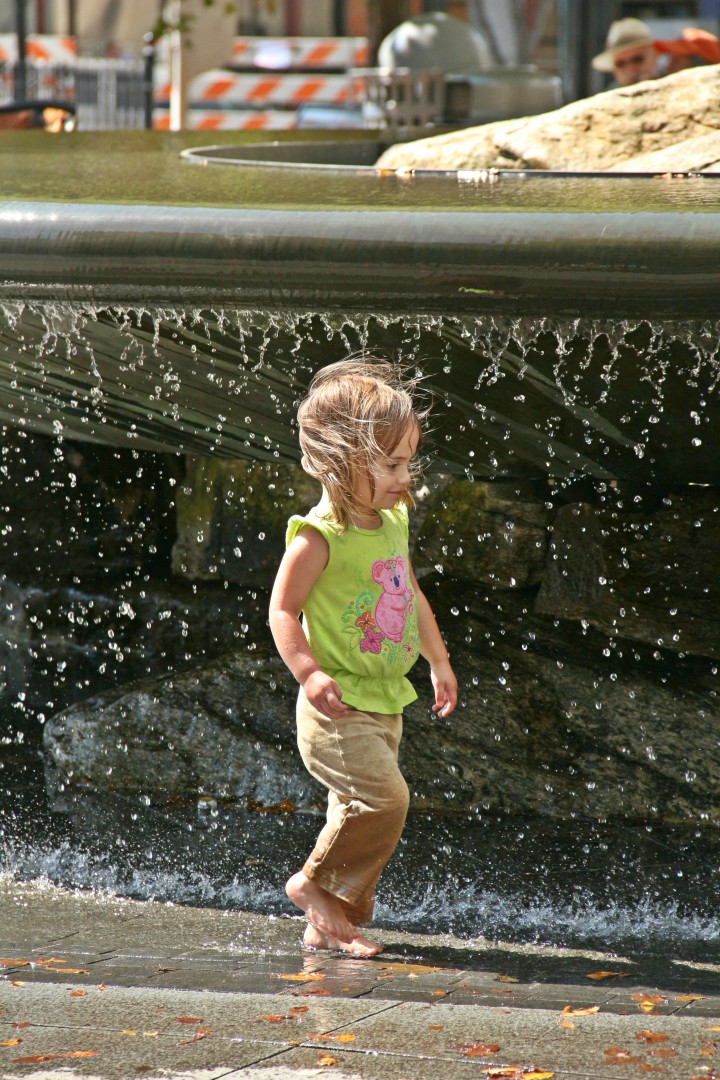 Enjoying the fountain at the Vance Monument in Pack Square Park 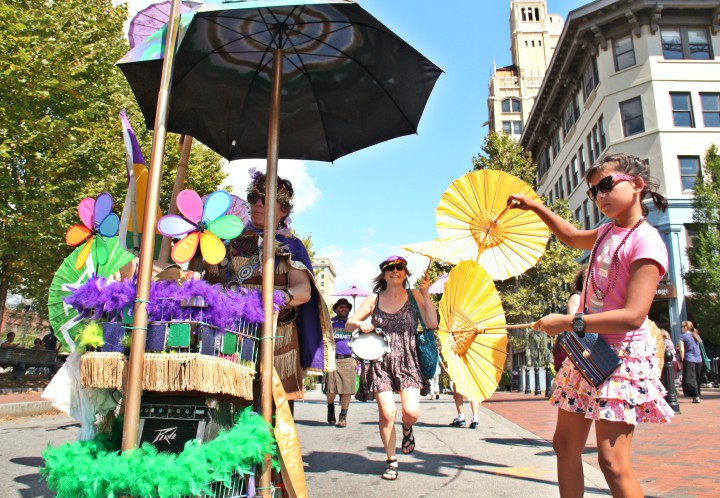 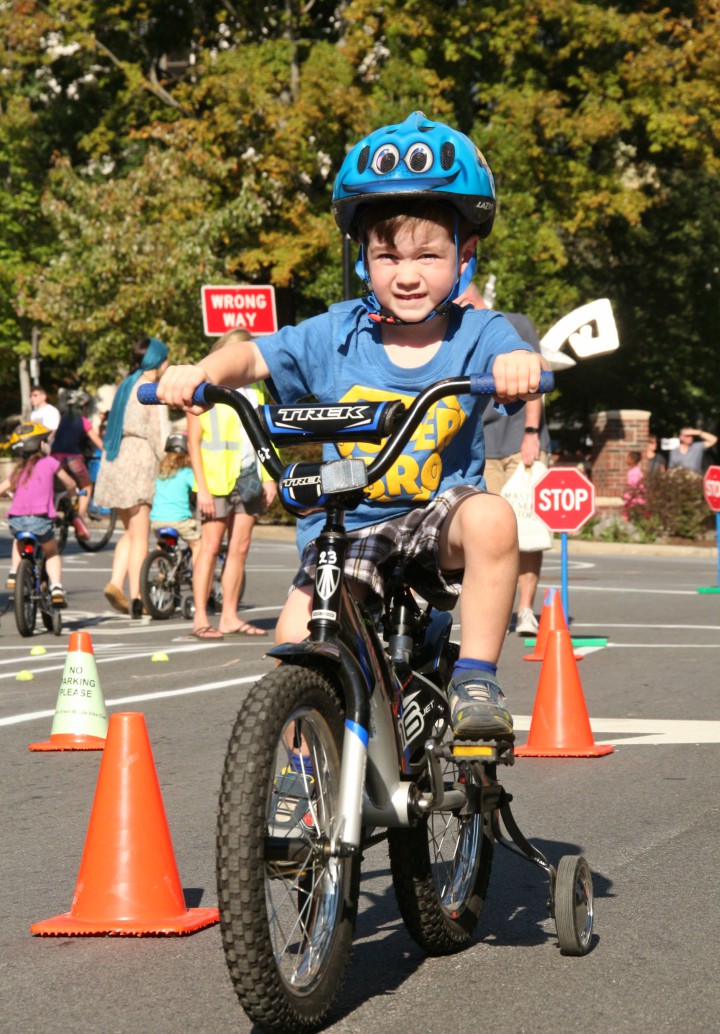 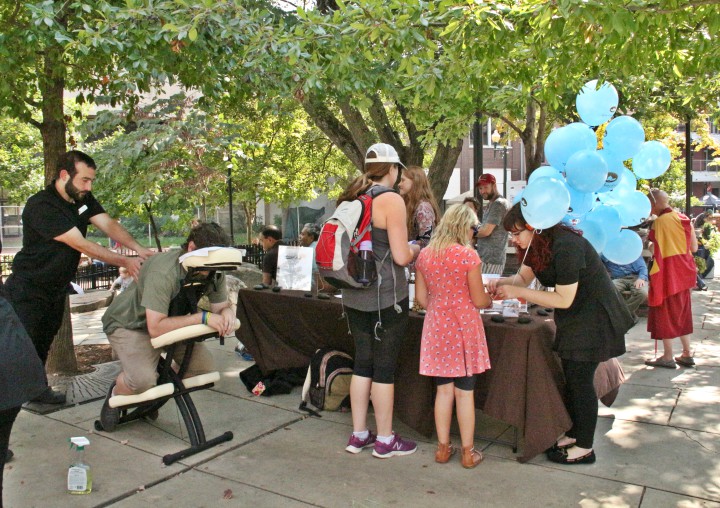 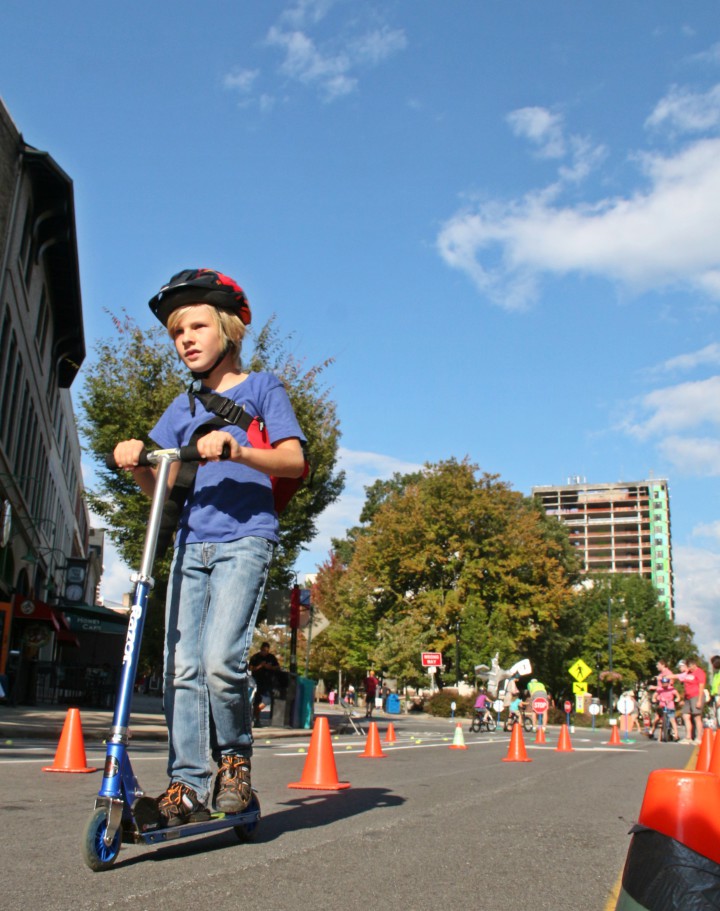 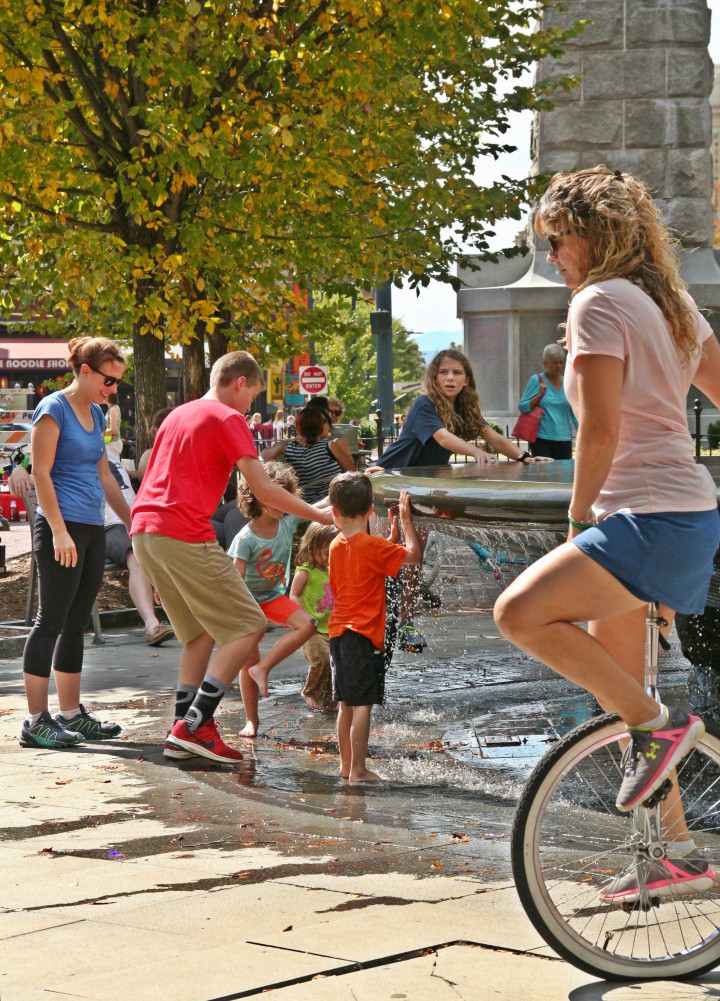 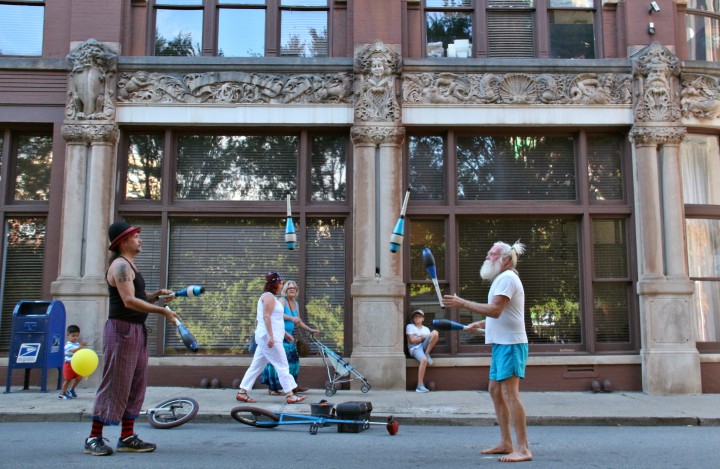 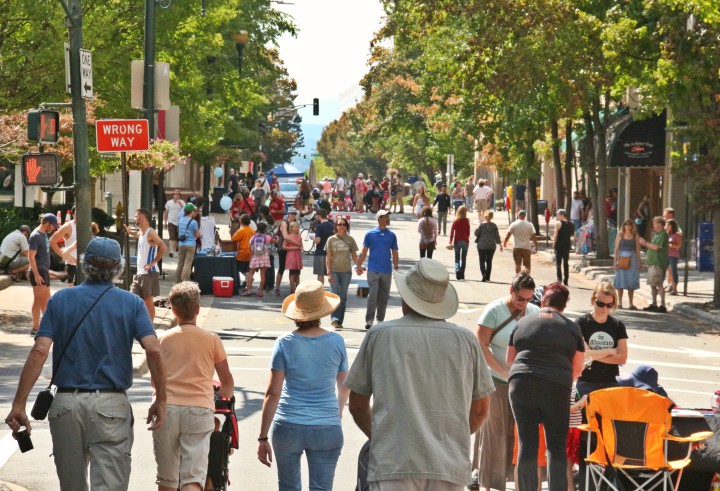 A rare glimpse of a car-free Patton Avenue.