Along a quiet back road on the western side of the Biltmore Estate, a burial ground dating to the early 1800s lies peacefully among a grove of trees and tangles of periwinkle. The grave markers themselves are nothing more than fieldstones turned on end, now punctuated with orange plastic flags.

After gathering in the parking lot of Inanda Baptist Church on Brevard Road near the WNC Farmers Market, about 60 descendants of the Joshua Jones family rode a shuttle bus to the burial ground.

Paul Cashion of Inman, S.C., is Jones’ sixth-great-grandson. A member of the Daniel Morgan chapter of the Sons of the American Revolution, Cashion addressed the crowds outfitted in traditional Continental Army uniform. He recounted the results of research he and Jones family historian Kenneth Israel had undertaken using records from the Daughters of the American Revolution and other sources.  Jones immigrated to the colonies from Ireland around 1750, originally settling as a child with his family in the Priddy’s Creek area of Albemarle County, Va. He was recorded as wounded during the Battle of Kings Mountain in 1780.

Jones settled in Buncombe County near the mouth of Hominy Creek with his wife, Elender, and their family in 1795. “He was 47 years old, and he may have remembered and thought, ‘Here’s a place like home that we should stay,’ and they did,” Cashion said. “They lived out the rest of their lives in the beautiful mountains that we see today. Both [Joshua and Elender] passed away circa 1839 and are buried behind us on a knoll of the Long Branch and French Broad River.”

Mark C. Anthony, National Society SAR Color Guard vice commander, explained, “What a lot of these families of the time would do, generally, they would just turn a fieldstone up and that would be it. That’s why we are dedicating a cenotaph. It’s a memorial marker that denotes this area and designates Joshua Jones as a recognized patriot of the American Revolution.

“This site is unique in that Patriot Jones is the only known patriot to be buried on land that is tied to the Biltmore Estate,” Anthony continued. “The dedication ceremony allows the SAR to bring to the attention of the public the patriotic service that was essential to the founding of the nation — both by picking up arms and by providing an oath of allegiance to the early patriot government in this region.”

The cenotaph, a large granite stone listing the names of Joshua, Elender and their nine children, was purchased and placed by their descendants in 2003. The memorial lies on what was originally a portion of Jones’ land on the west side of the French Broad River. The property was eventually purchased by George Vanderbilt and became part of his estate. The site is within a stone’s throw of what is now the Biltmore Sporting Clays Club. Even before the ceremonial musket salute rang out, the sound of gunfire resounded in the background throughout the event.

Israel thanked the Cecil family and estate staff for making the cemetery location accessible to his family. He especially noted the assistance of Bill Alexander, Biltmore’s landscape and forest historian. “I want you to know that I designed this stone and paid for it and had it placed here. Bill Alexander saw that we had help, people and even bulldozers, that came and put the stone in place. People were lined up all the way down Long Valley as far as you could see. There were so many of us, it was just absolutely thrilling.”

Alexander also welcomed the assembled family on behalf of Biltmore and shared a bit of historical detail about the research he and his staff had done while working with the families to coordinate the care of the site. “My roots go back to the founding of the county, and my family has a lot of history here, so it’s kind of been a labor of love for me all these years, a little bit at a time,” he said. “It wasn’t necessarily a part of my job at the beginning, but I sort of built it into my job description.”

In his opening to the ceremony, Anthony remarked on the importance of this and similar memorial events: “If the past is indeed a prologue, then a glimpse from the past can provide a source of inspiration and wisdom for the future.” 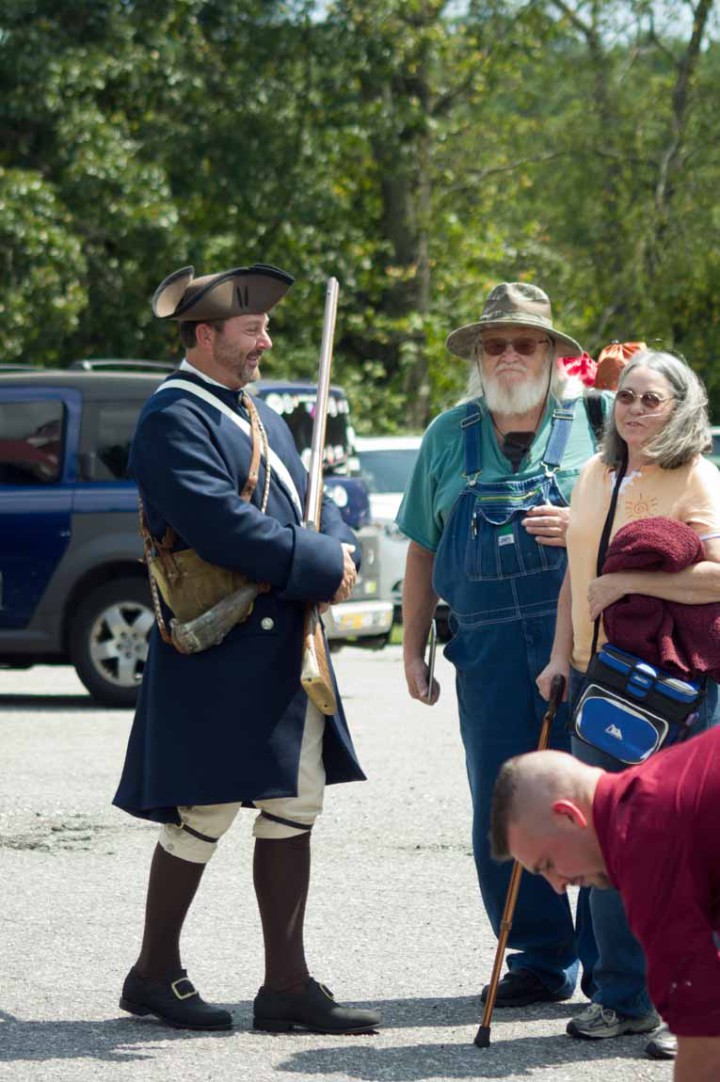 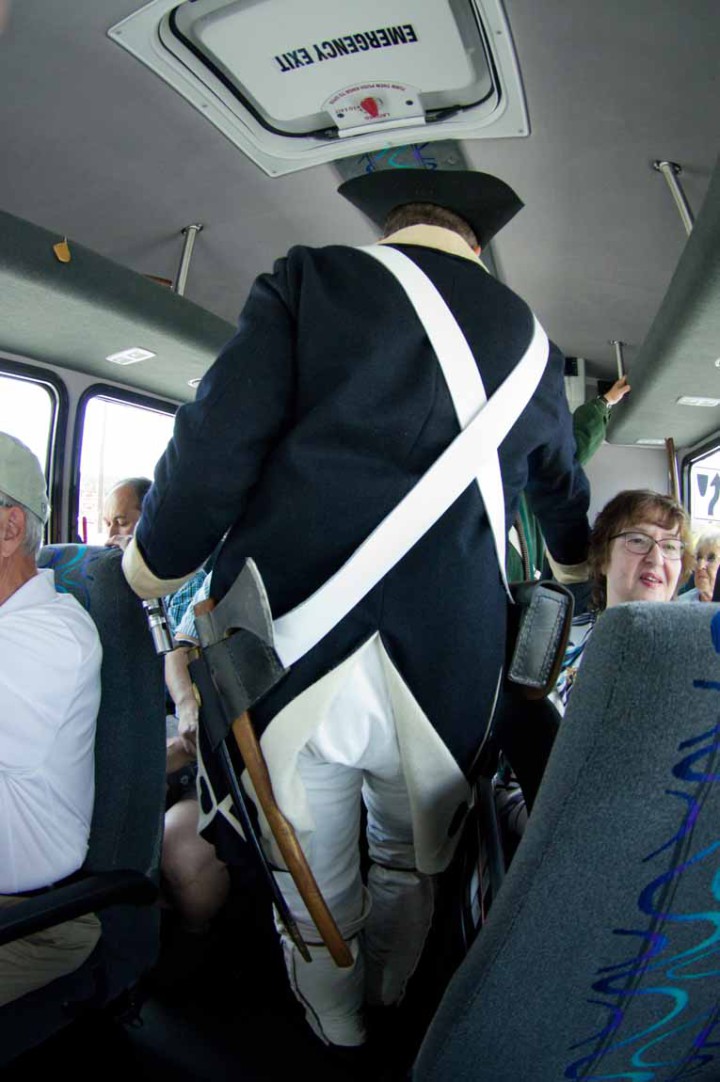 A Son of the American Revolution color guard member rides the shuttle to the burial site. Photo by Cindy Kunst 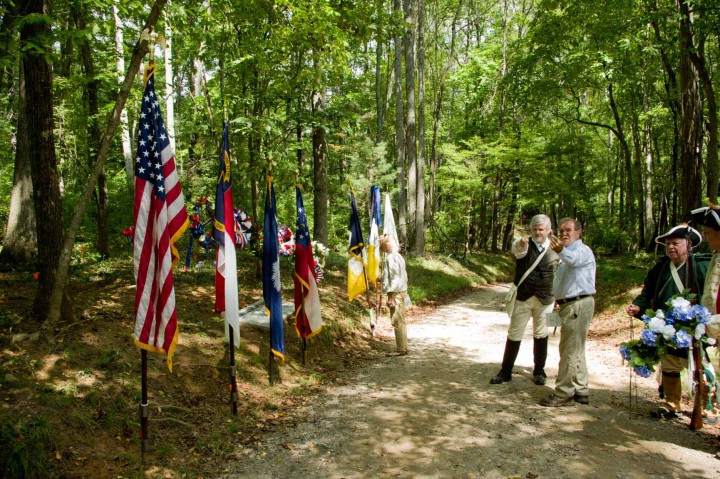 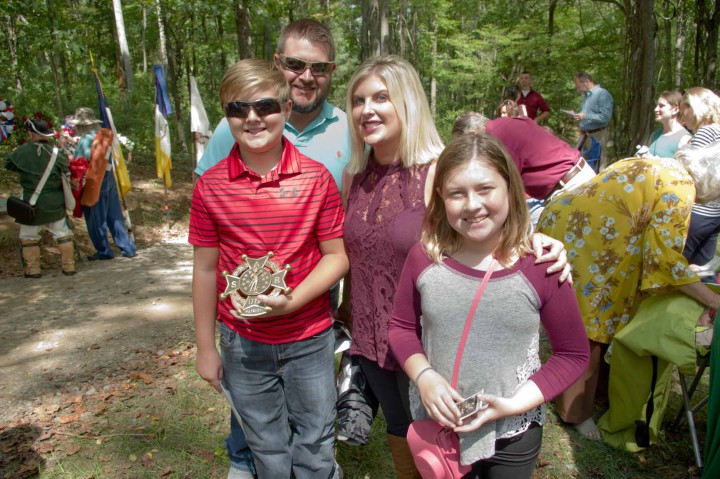 Seventh- and eighth-generation Jones descendants (L-R), Kayden, Brandt, Amanda and Lashlee Cashion of Bowling Green, KY, carried the SAR patriot marker that will be added to the cenotaph at the Jones burial grounds. Photo by Cindy Kunst 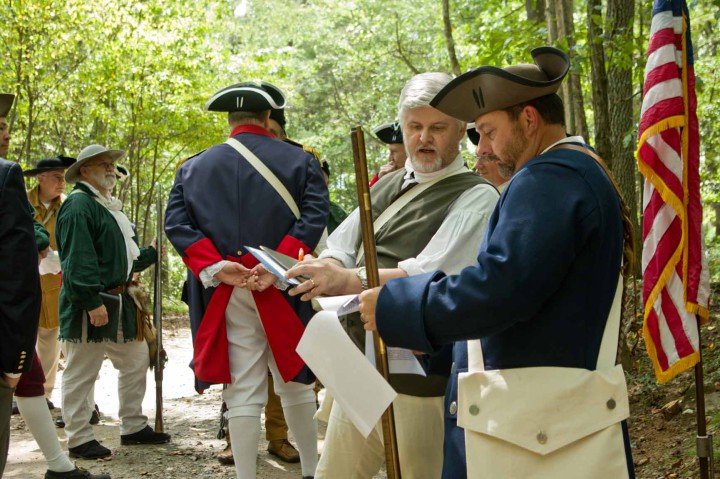 Paul Cashion and Cmmdr. Mark Anthony of the SAR coordinating the event. Photo by Cindy Kunst 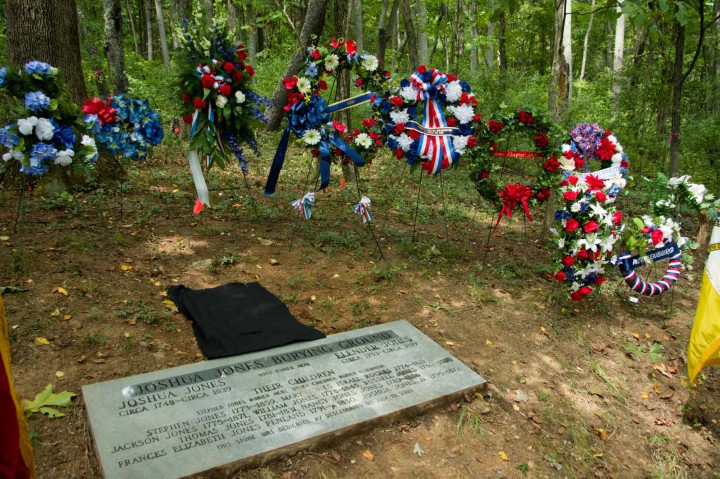 Wreaths from family and different regional chapters of the SAR were presented around the cenotaph for the Jones Burial Ground. Photo by Cindy Kunst 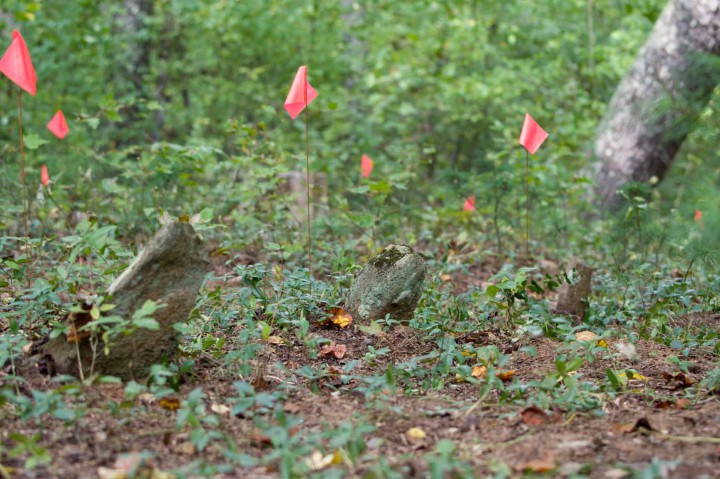 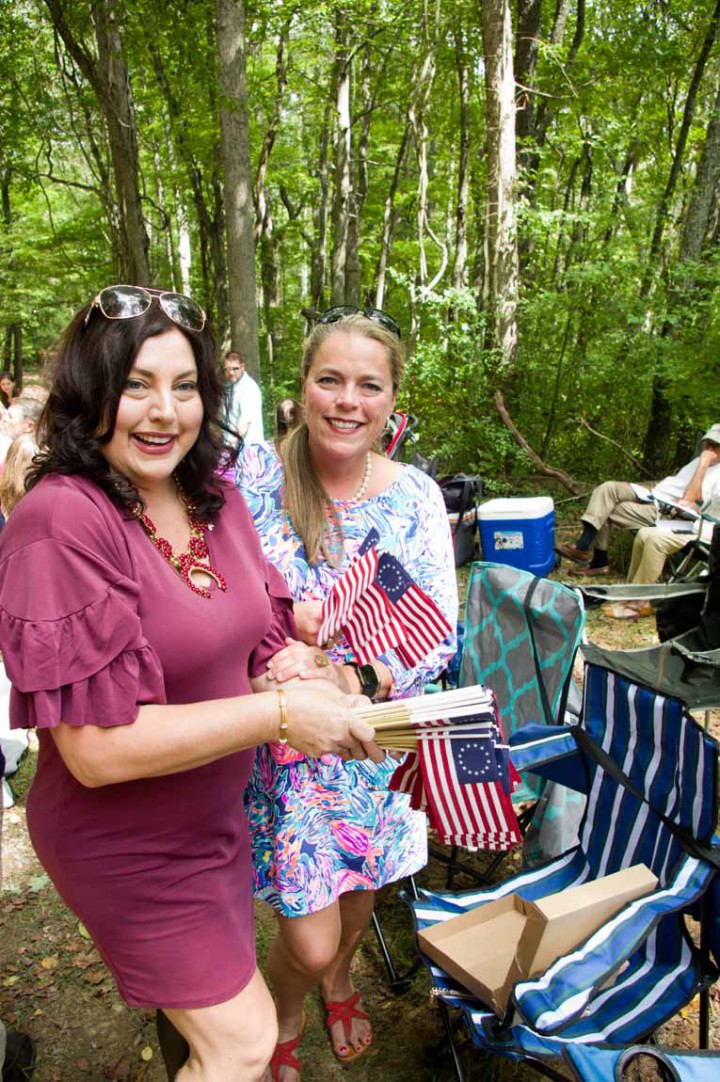 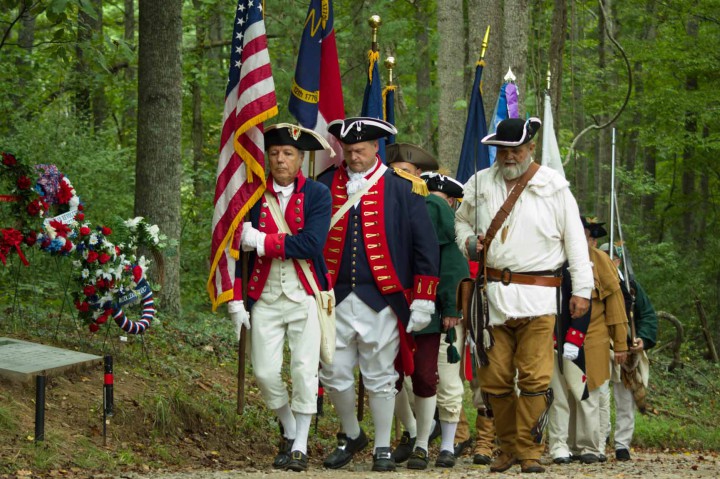 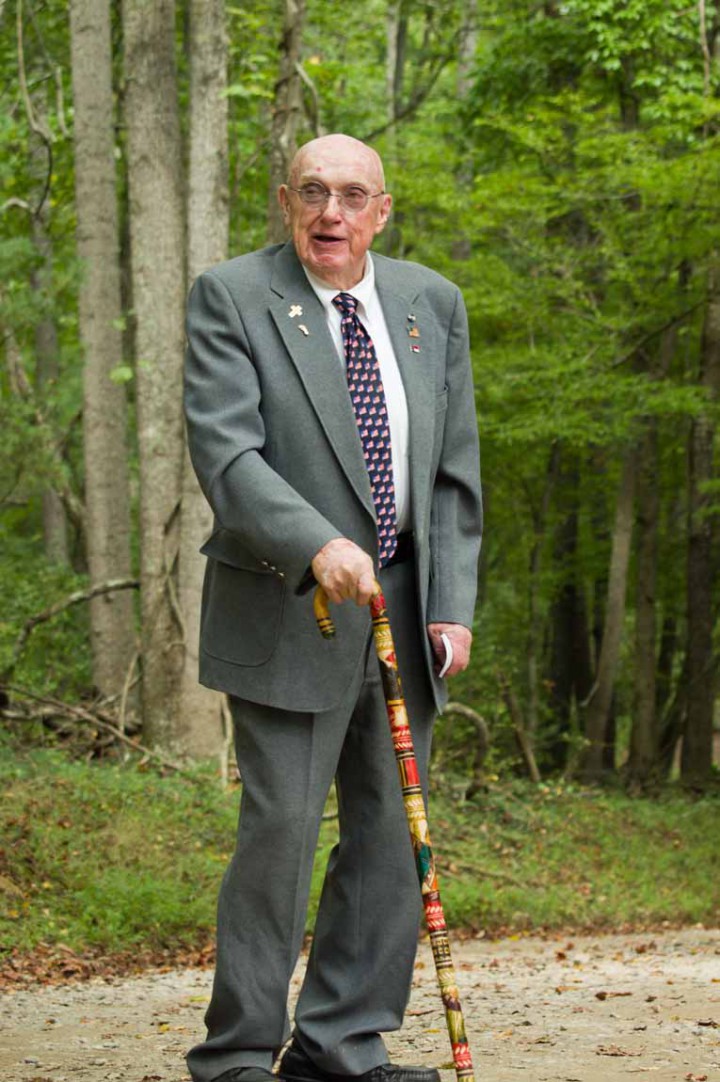 Dr. Kenneth Israel, Jones descendant, historian, genealogist and author, offered thanks to the Biltmore Estate on behalf of the family. Photo by Cindy Kunst 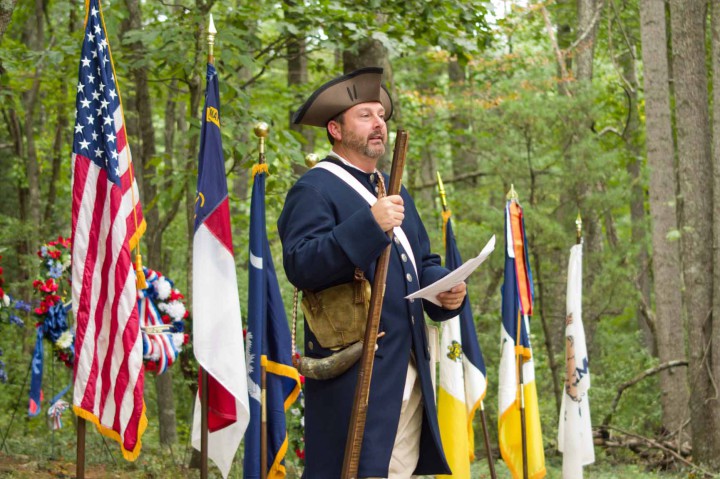 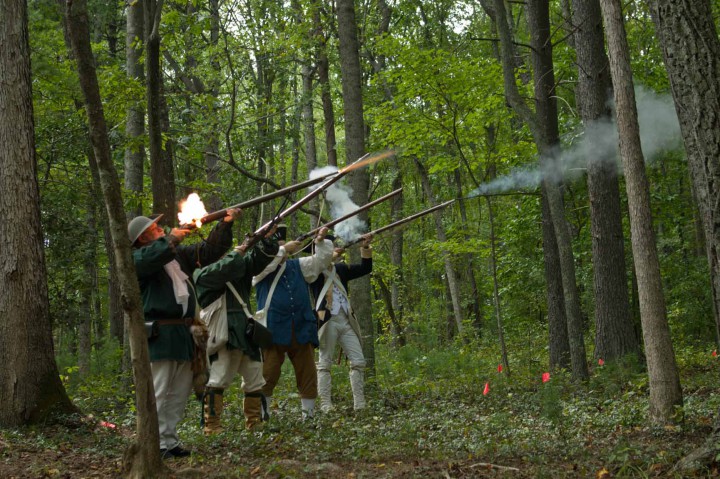 LIVING HISTORY: A musket volley salute was fired over the burial ground by the Sons of the American Revolution color guard during the dedication of the Jones Family burial ground. Photo by Cindy Kunst 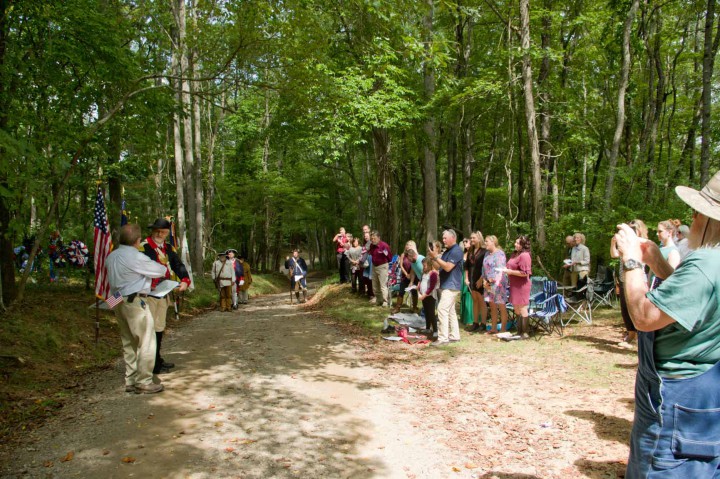 Bill Alexander, Landscape & Forest Historian at the Biltmore Estate, was awarded with a certificate of appreciation from the SAR for his work organizing the event and working with the family. Photo by Cindy Kunst 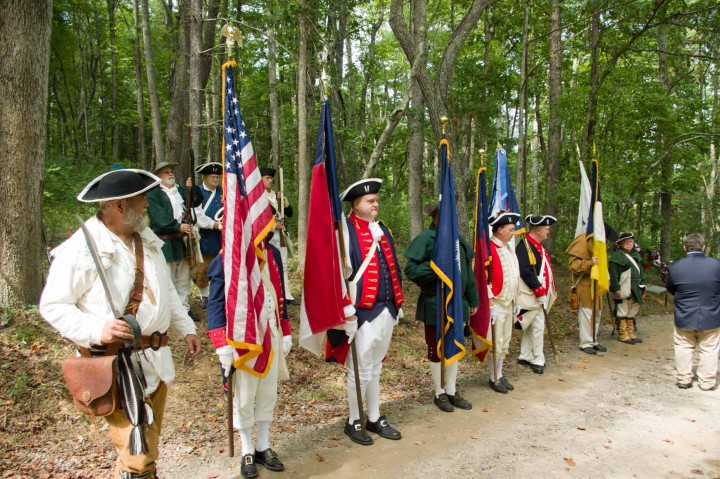 Dismissal of the SAR color guard. Photo by Cindy Kunst