Most careers are studded with milestones; those dotting the highway to success as a band are fairly well known. Get people other than your friends to come to your shows, start playing in bigger venues than, say, your neighbor’s porch; record an album, take a small tour. Get a manager, play festivals, record more albums and (fingers crossed) have Bob Boilen take note. Come back to Asheville and headline The Orange Peel. If that sounds tongue-in-cheek at all, witnessing River Whyless take the stage at The Orange Peel last weekend was no joke. That particular group of musicians — who so deserve every measure of success that they’ve achieved — arrived at their landmark moment with a kind of starstruck awe. But they also played it like bosses, like four artists who’ve honed their sound, grown together as a group and know how to make a spotlit instant into a propulsive, transformative, unforgettable experience.

It was history in the making. It was an arrival. And it was probably also a departure because, as much as River Whyless is cut from and contributes to the fabric of Asheville’s music scene, this is a band that is no longer just local, just ours. The group has made its leap to the next level and it was a joy to watch them take flight.

And what a flight! For those in the audience who remember River Whyless on the smallest of stages and the earliest iterations of All Go West Festival (they were still called Do It To Julia then), to hear the band’s stratified sound — epic sweeps, textural melodies, nuanced moods, a tapestry of sound that thickens and thins, dynamic and alive — on The Orange Peel stage, in that large room with a whole array of lights, the journey focused into a Technicolor clarity.

At the same time, each of the artists remains utterly themselves. “Maple Sap,” led by guitarist Ryan O’Keefe, draws from the songwriter’s off-the-grid upbringing and sounds autumnal. Abundance (of sound, of imagery) at the threshold of winter’s scarcity, that chilly duality expressed in music and lyric. It was the right mood for the blustery fall evening.

“Blood Moon,” written by violinist Halli Anderson, comes from deeply personal musings about desiring a child. The song, performed in red light, resonant and tidal, was spellbiding. There’s also something so moving about this distinctly feminine song being performed in collaboration with three men. Because, while River Whyless is a collective of individual talents and ideas, onstage the musicians also work as a single organism, a shared vision, a shared breath.

They performed “Sailing Away” — a song from the band’s NPR “Tiny Desk Concerts” appearance — around a single mic, with O’Keefe on a toy piano and percussionist Alex McWalters on a hand drum. The song originated with bassist Daniel Shearin, who recorded it a couple of years ago at The Mothlight. Shearin is the latest member to join River Whyless, but his contribution is seamless. His song, “Miles of Skyline,” first recorded with his former band, Uncle Mountain, was another highlight of The Orange Peel show.

That song, like so many of River Whyless’ offerings, is not just influenced by nature, but infused with it. There’s something Whitman-esque in the way the musicians not only draw inspiration from nature — from seasons, landscapes, air currents and shifting light — but incorporate the elements into their compositions. And even those songs that aren’t directly culled from the natural world feel organic and grounded. “Falling Sun,” from the new album,We All the Light, has a creeklike burble and dance. The drone sounds eastern, there’s a hint of a sitar tone, the rhythm emanates from tambourine, cymbals, a flutter, a clank. (It’s worth mentioning that McWalters is the perfect drummer for this band, his playing melodic and intuitive, so in sync with the way the other musicians lace instruments and voices in and out of the kaleidoscope of each song.)

The set ended with a fiery version of “All Day All Night,” also from the new album. Anderson played her violin as auxiliary percussion, vocals flowed together and apart again — an incantation, a chant — and the energy rose like an exorcism in the midst of a tent revival. — Review by Alli Marshall 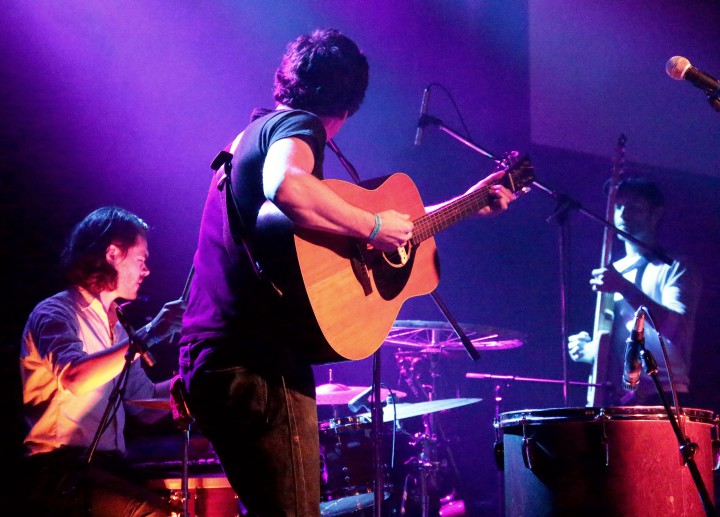 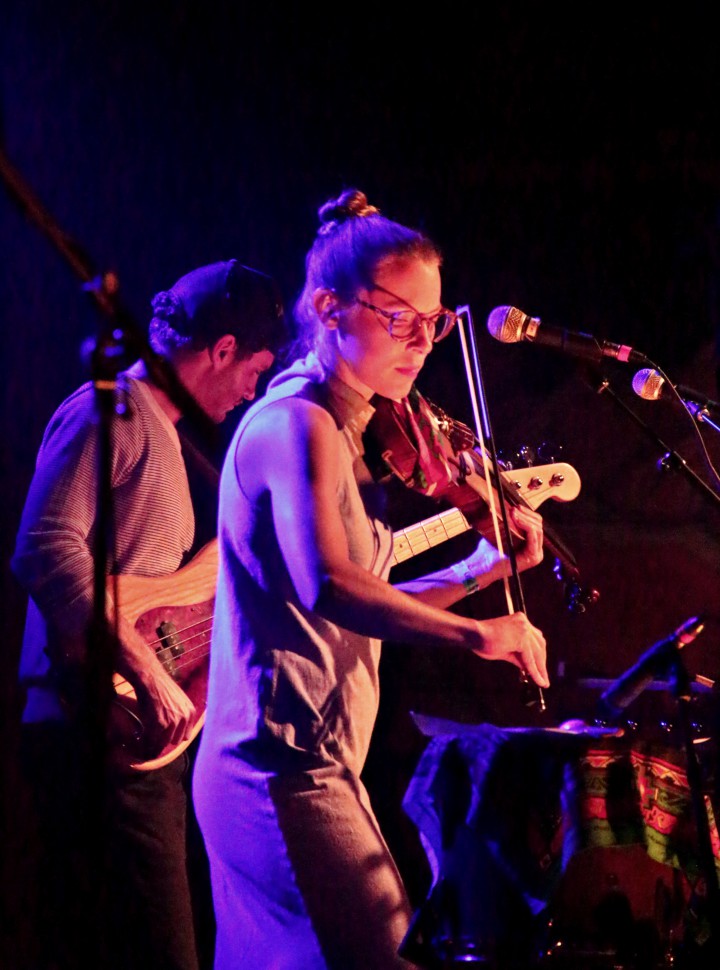 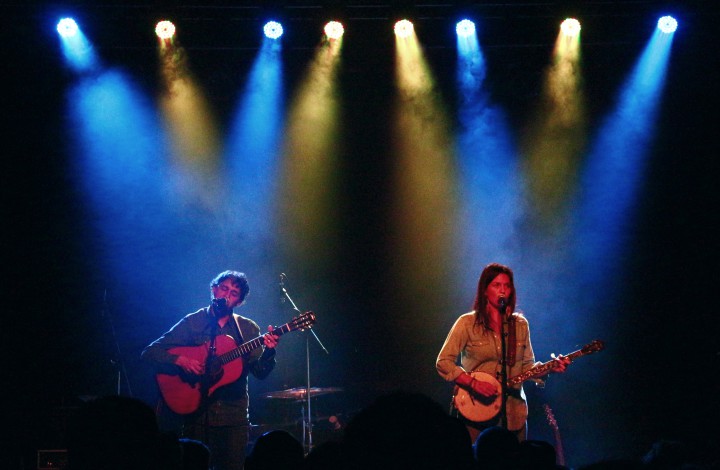 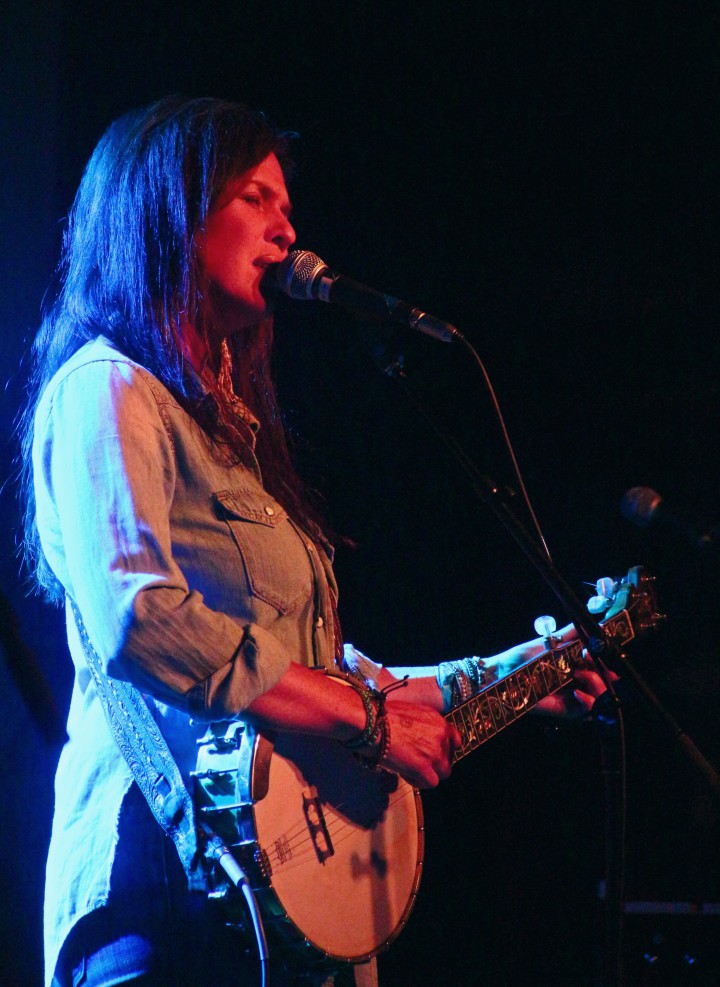 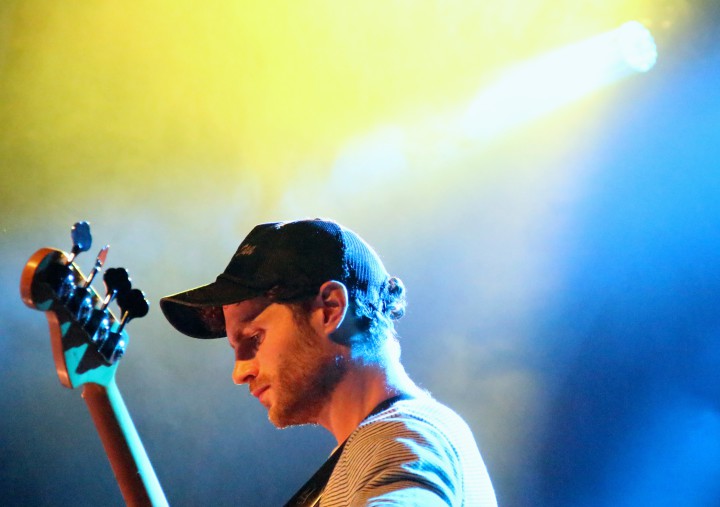 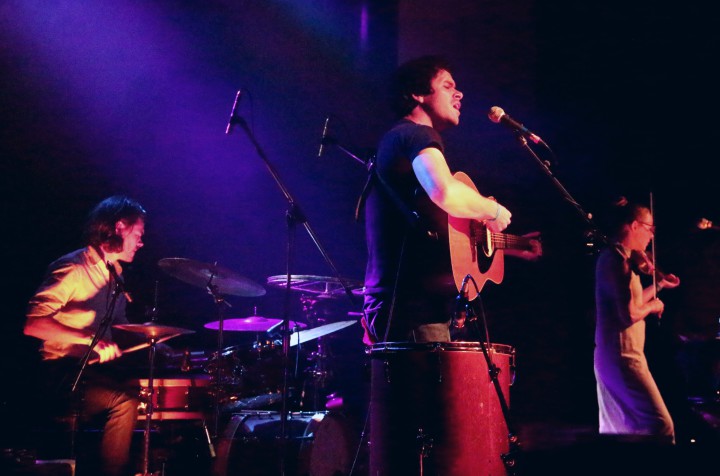 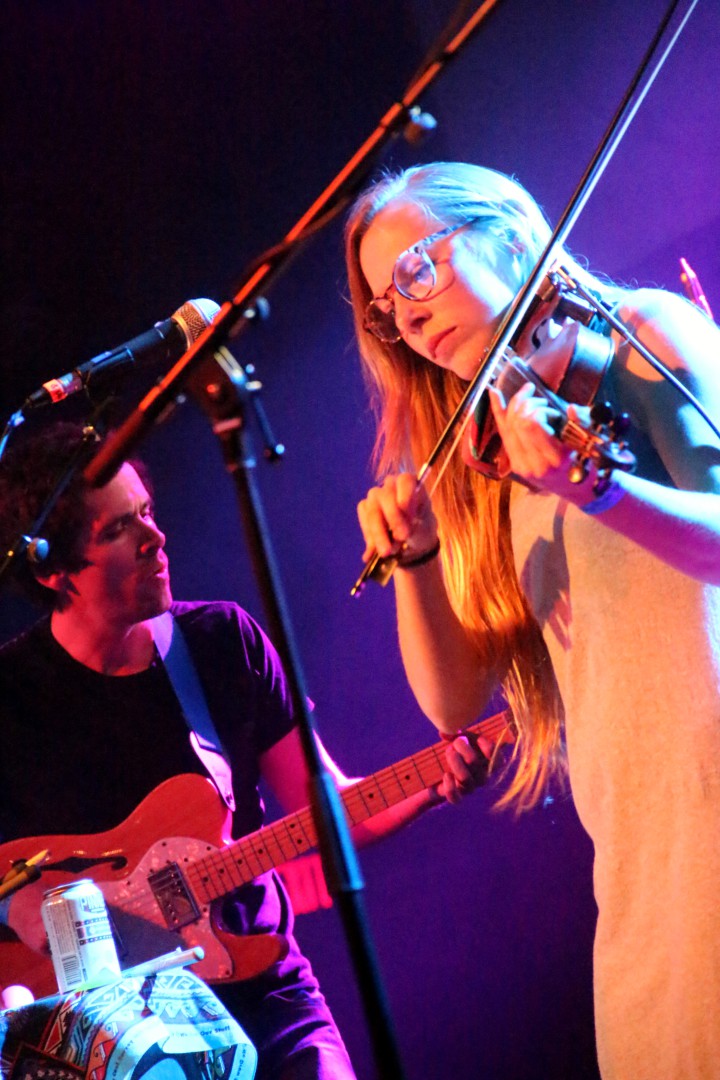 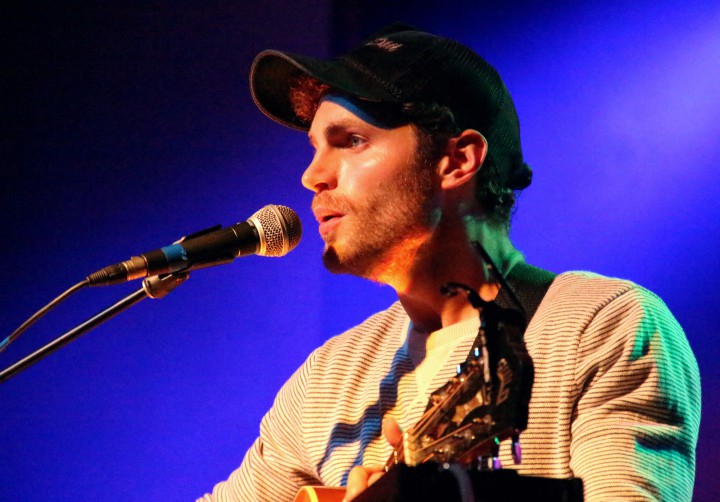 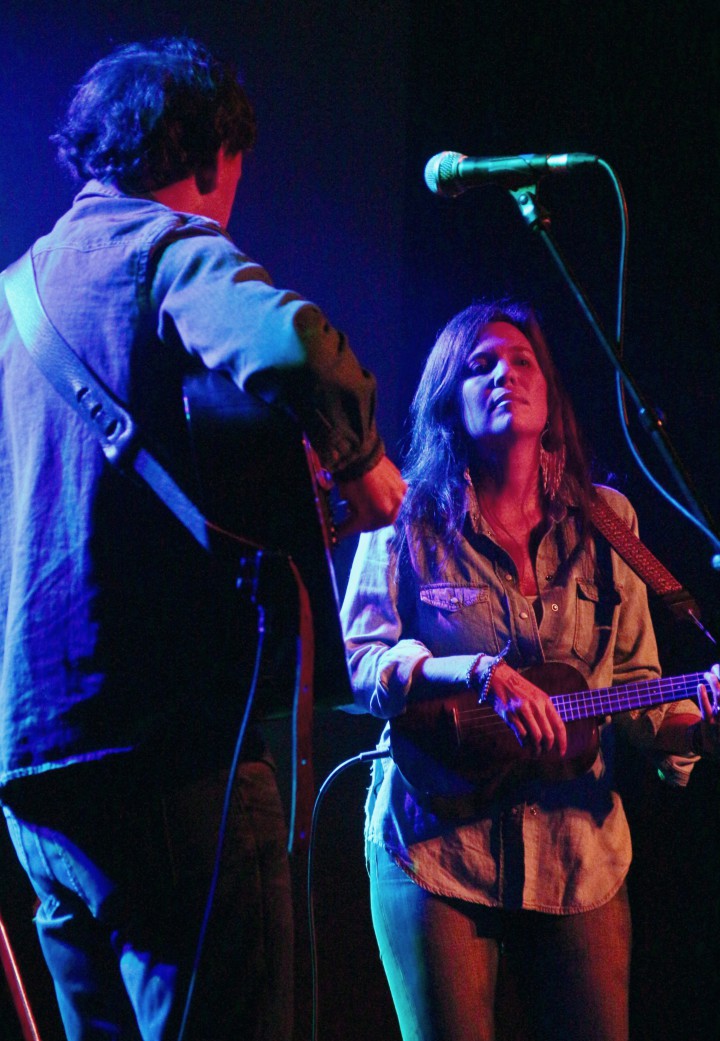 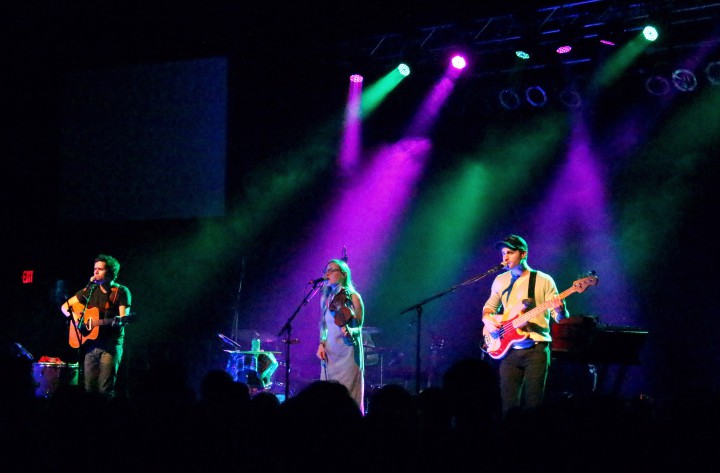 River Whyless playing to a full house of attentive fans. 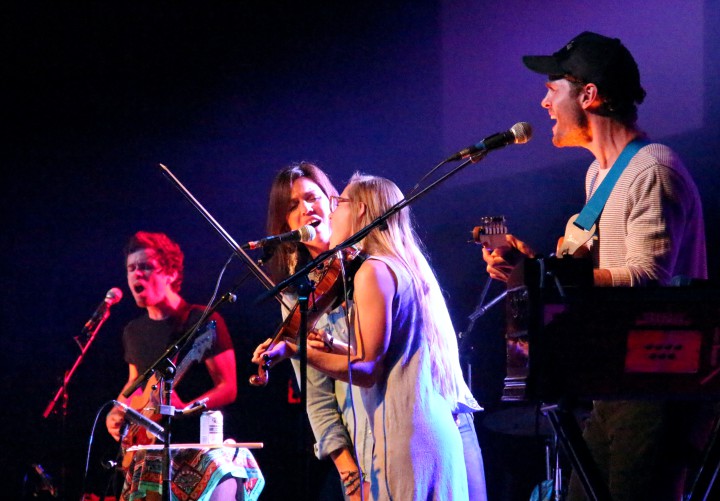 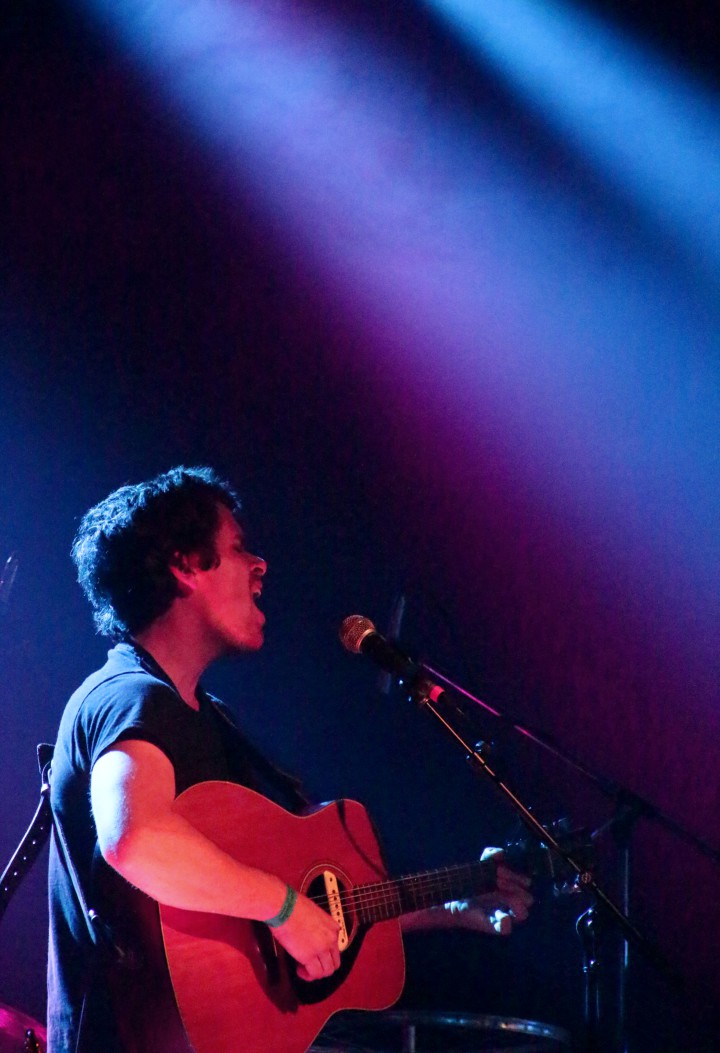 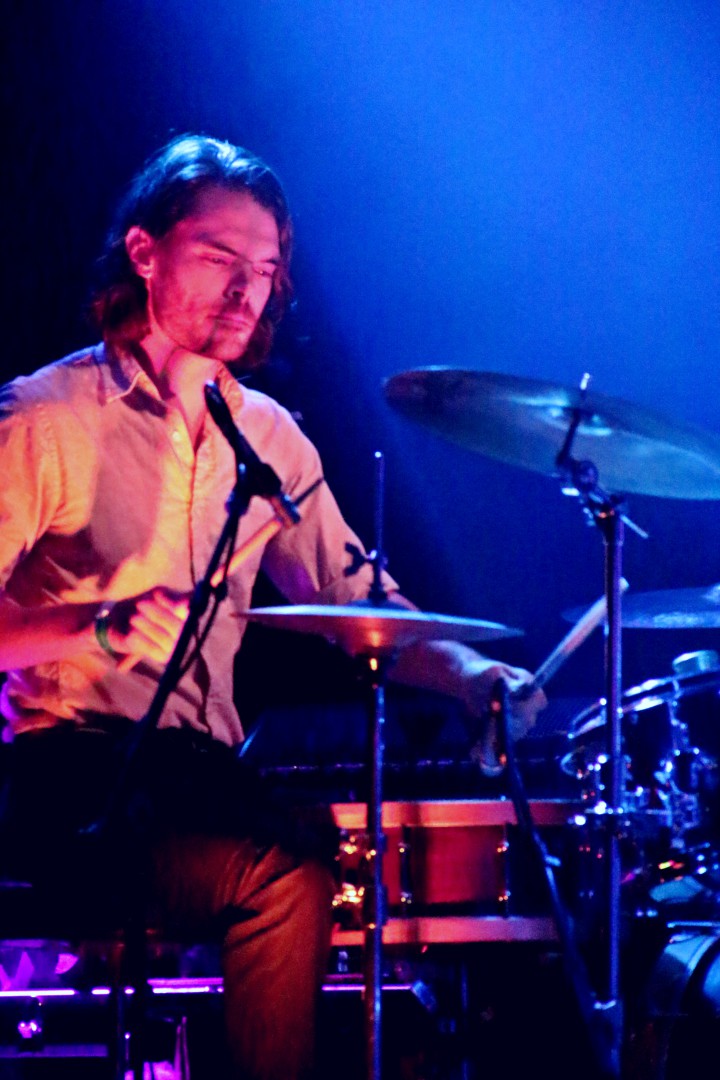 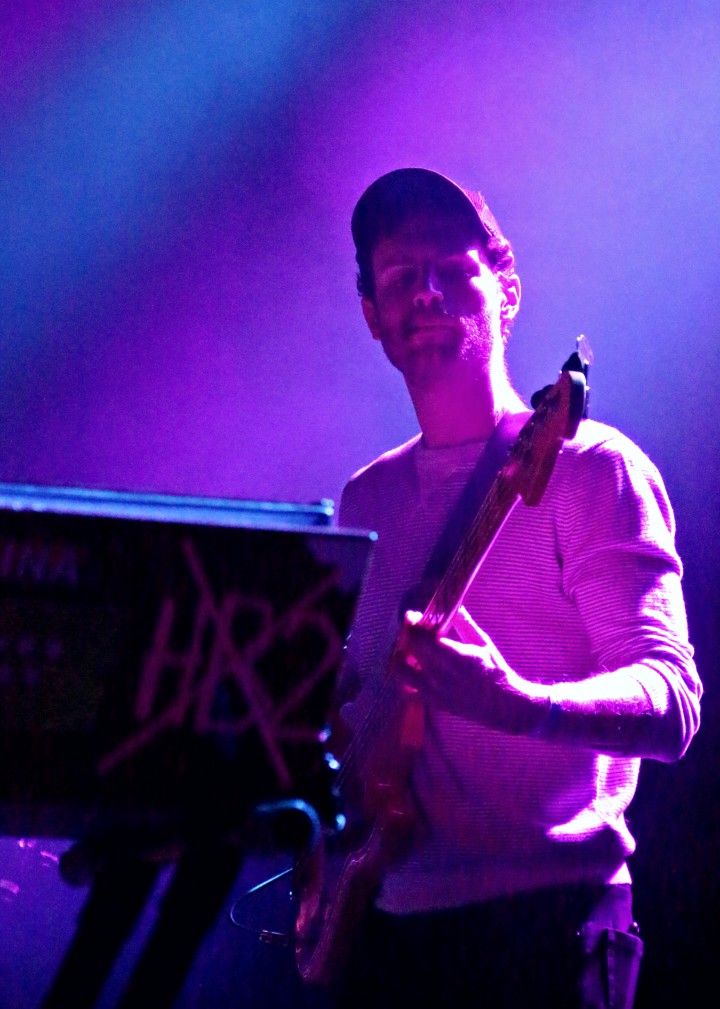