The Asheville Museum of Science held a soft opening from 10 a.m. until noon at its new location in the Wells Fargo building at 43 Patton Ave. In addition to the opening reception, an official ceremony celebrated a $400,000 grant awarded to the museum by the Buncombe County Tourism Development Authority.

The museum’s opening reception offered a chance to explore several interactive exhibits. An expansive display of minerals transferred over from the old Colburn Earth Science Museum featured a “touchable” mineral and magnet area for children to explore. In the next room, parents and kids experimented with an interactive satellite positioning exhibit and a Mars Rover demo course, complete with a six-wheel drive replica rover built by Asheville’s Beatty Robotics.

Several folks entered the hurricane simulator near the rover track, while in the corner of the exhibit room, a replica cast of the prehistoric T. Curriei — a distant cousin of the T. Rex — loomed over a collection of fossils at its feet.

Sketches hung around the museum detailed three other major exhibits yet to be built, including one on the natural history of the French Broad River, an expansion of the dinosaur/paleontology exhibit and an interactive forestry exhibit where students can literally climb to the top of the canopy.

In addition, several smaller exhibits will be added in the near future, said Anna Priest, AMOS’ executive director. “We have the designs complete, and our contractors are ready to go and waiting on the word,” Priest said. The museum is hoping to raise an additional $300,000 to complete the projects before its grand opening in early 2017.

Until then, AMOS will be open to the public Monday through Saturday from 10 a.m. to 5 p.m., and Sundays from 1 p.m. until 5 p.m. Museum goers will enjoy half off admission and 20 percent off memberships fees from now until the grand opening.

Following the open reception, an awards ceremony was held in the Museum’s STEM room, where AMOS’ board and staff were officially presented with a Tourism Product Development Fund grant.

“We started this journey last October with a donation from the Buncombe County Tourism Development Authority for $400,000,” said Priest. “Since then, it’s been a mad dash to plan and design a new museum, pack up the old museum and build and develop what you see today.”

She noted that the museum has continued to serve nearly 20,000 residents of WNC during that time — including 10,000 local students — through field trips, after-school activities and AMOS’ Saturday Morning Science and Beer City Science Pub programs.

“All this could not be possible without you,” Priest told the audience. “I’d [also] like to recognize the TDA: They saw our potential early on, and we wouldn’t be where we are today without them.”

Asheville Convention & Visitors Center Executive Director Stephanie Pace Brown spoke next, noting that projects like AMOS “not only attract visitors to our community to spend their dollars in Asheville, but also add to the quality of life.” Brown thanked AMOS’ board and outgoing chairman John Newman for his “passion and inspirational vision” in bringing the museum to fruition.

Former Tourism Fund Development committee member John Ellis offered his congratulations to AMOS’ staff and board as well, asserting that “it was time for your organization to get out of the basement and come up here.”

“More than anything,” Ellis continued, “we realized how many families are now coming to visit this market. It was so encouraging at that time to say, ‘Here is an organization who is going to create a new experience for families together and children that would be right on the main street.’ This is an investment that will return to this community many, many times.”

Brown then gathered with Priest, Newman and other members of the AMOS board for the official presentation of the $400,000 TPDF grant. Afterwards, Priest once again acknowledged Newman’s contributions to making the museum a reality. “He’s poured his blood, sweat and tears into this museum for five years,” she said. “He’s seen it at its worst, and is helping it to become what it’s meant to be for our community, our children and his new son Eli.”

Newly appointed AMOS Board Chair Edward Gardiner offered his thoughts, noting that the museum “really is a home-grown effort.” He acknowledged the contributions of locals in Buncombe and Madison County — specifically those of Elumenati, a local design and engineering firm, in implementing the hardware and software for museum exhibits.

“We are going to show the world something truly homegrown,” Gardiner said. “It represents all of you — your energy and dollars are making that possible for students all over the county and the city to get much-needed education in science.”

To infinity and beyond

Priest closed by calling on those in attendance to spread the word about the museum and its mission to friends and other members of the community. “The work does not stop here,” she noted. “Encourage them to be a donor, become a member; invite them to a Saturday morning science of Beer City Science Pub event. All this can help us reach our goal to become downtown Asheville’s family-friendly venue and a place of science and discovery for all.”

Individuals who donate $1,000, or companies who offer $2,500 or more, will be officially recognized on AMOS’ “Periodic Table of Donors.”

For those who can’t offer that much, Priest says there are still many ways to help the museum find its footing and become downtown’s newest staple. “Community members can donate, volunteer their time or become a member of the museum.” she said.

The Asheville Museum of Science will hold a grand opening event sometime in early 2017, depending on the completion of the remaining exhibits. For more information on AMOS, or to find out how you can help, visit ashevillescience.org, check out the Facebook page or stop by the museum at 43 Patton Ave. in downtown Asheville. 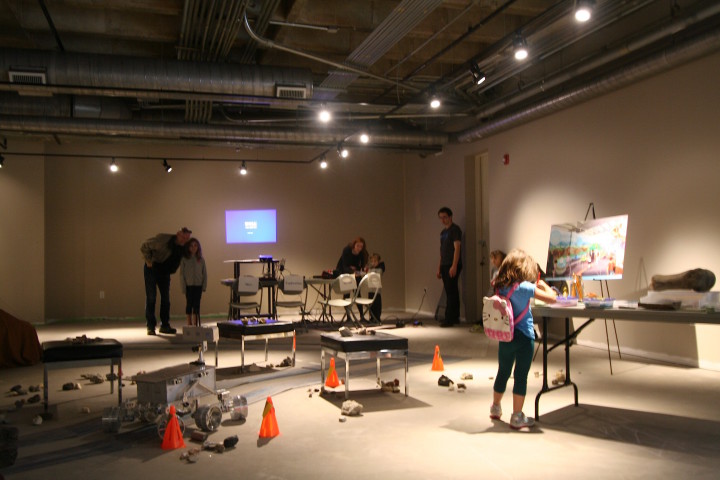 Exhibits like the Mars Rover track pictured here offer children and adults the chance to learn about science and technology in a gripping, hands-on way. Photo by Max Hunt 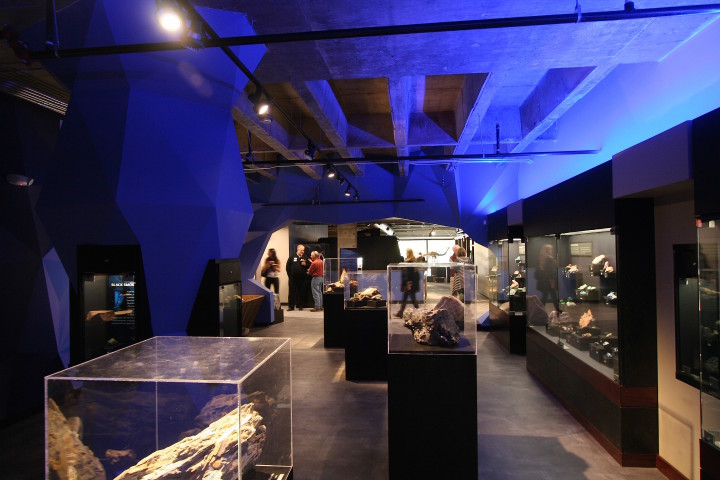 The Colburn Hall of Minerals features local gems and stones from across WNC. It was named in honor of AMOS’ predecessor, the Colburn Earth Science Museum. Photo by Max Hunt 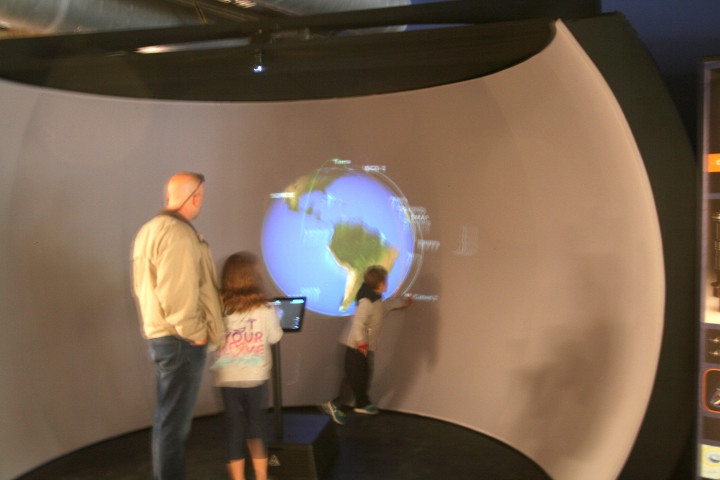 A family experiments with the satellite imaging exhibit. Photo by Max Hunt 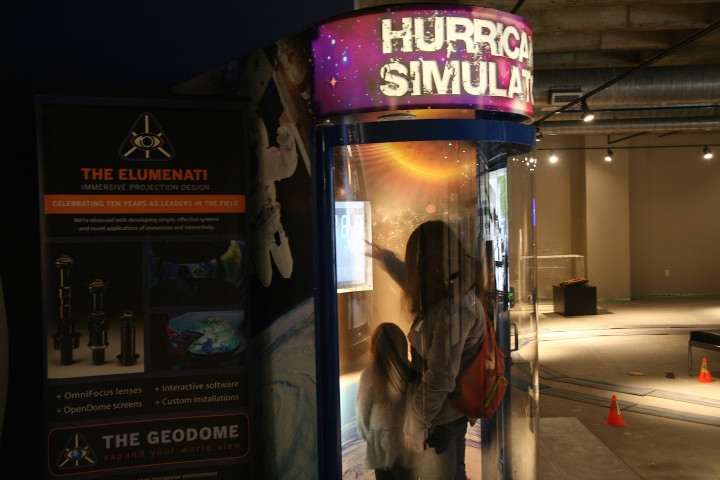 Some attendees tried out the Hurricane Simulator during the opening reception. Photo by Max Hunt 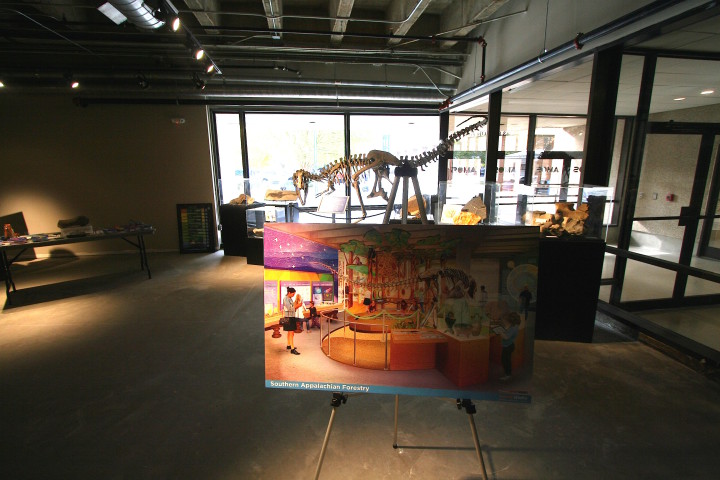 A conceptual drawing of the Forestry exhibit, which will be installed prior to the museum’s grand opening in 2017. Photo by Max Hunt 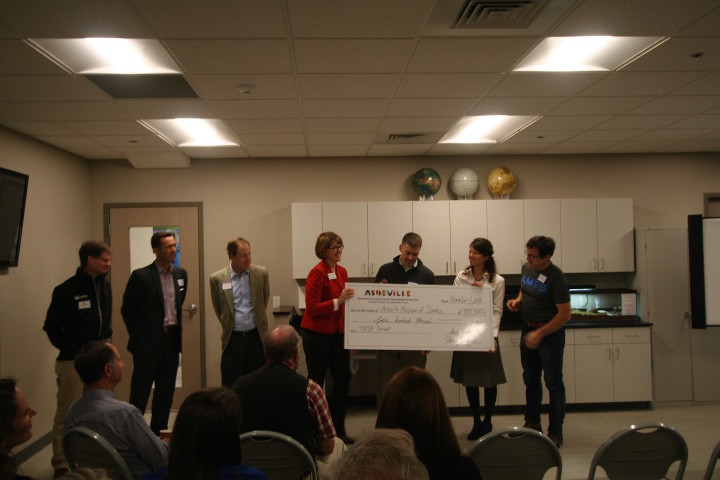 Stephanie Pace Brown presented Priest, Newman and other members of the AMOS staff and board with an official check for $400,000 on behalf of the Buncombe County TDA. Photo by Max Hunt 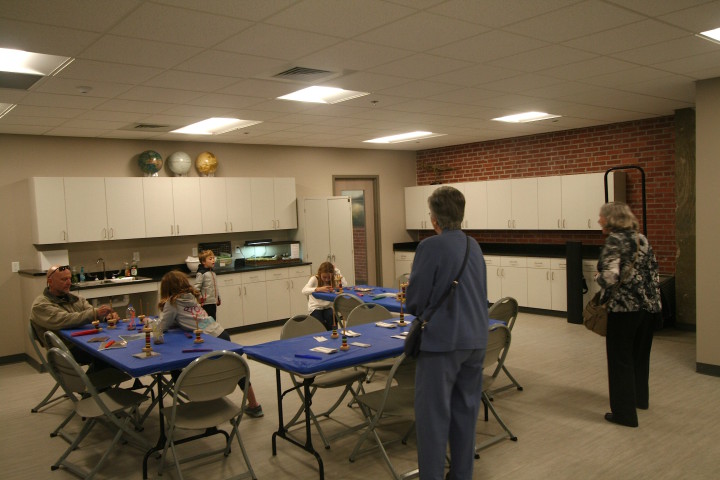 Children gather with local educators after the grant award ceremony for an interactive STEM workshop. Photo by Max Hunt