“When you play a game of thrones, you win or you die.”
― George R.R. Martin, A Game of Thrones

Ah, well, the stakes aren’t quite that high in this year’s Buncombe County municipal elections, but candidates are certainly making a heroic push to connect with voters as the Nov. 7 general election draws near. Our 2017 Voter Guide features Q&A with candidates for Asheville mayor and three seats on City Council, while a roundup of small-town issues and candidates speaks to the choices faced in Buncombe’s smaller municipalities.

You’ll find the latest issue at one of our 800 distribution locations spread across nine WNC counties by Wednesday, Nov. 1. Here’s a sneak peek: 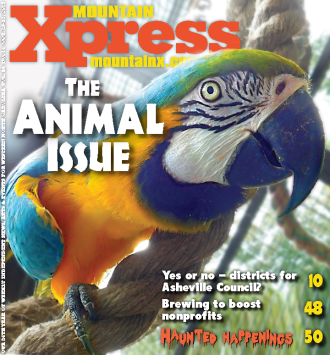 In last week’s Animal Issue, we checked in on our area’s love affair with animals — from a visit with the Parrot Whisperer to a stop at a house cat museum to a chat with local experts about a most misunderstood mammal.

In case you missed them, here are some highlights from last week’s Xpress: Heather Snipes, known to her clients as the “Parrot Whisperer,” owns A Parrot’s Tale, a bird therapy and bird training practice that she operates from her home. Snipes says her mission is to help bird owners understand there’s more to taking care of a bird than putting it in a cage and feeding it birdseed. The items on display inside the American Museum of the House Cat Museum in Jackson County combine the quirky and the kitsch with the morbid and the mysterious. Going batty: Get to know these misunderstood mammals

According to Katherine Caldwell, a biologist with the N.C. Wildlife Resources Commission in Asheville, the number of flying insects bats snap up on their nocturnal hunting expeditions is “almost incomprehensible.” While their spooky reputation is slowly giving way to a more nuanced understanding of bats’ critical role in the ecosystem, we still have a lot to learn about these unusual mammals. Young participants in Buncombe County 4-H programs learn a wide range of skills. Some involve caring for farm animals, while others — like responsibility, teamwork and persistence — apply to a wide variety of subjects and situations. Xpress talks with kids and their families about their 4-H experiences. With over $10,000 invested in care for Pipsqueak, a cat with a rare genetic condition, owner Kerbie Berggren says she’s earned a title she never thought she’d bear: crazy cat lady. On July 1, 1902, the ostrich farm opened on the corner of Merrimon and Coleman avenues. Tragedy and mayhem would ensue. Estimates place the number of haunted house attractions in the United States in the thousands. Xpress caught up with some of the local haunts to get a behind the scenes look at the industry. Asheville voters to weigh in on district elections for City Council

Asheville voters will be asked to weigh in on a state plan to create election districts for seats on City Council via a ballot question in this year’s Nov. 7 general election.